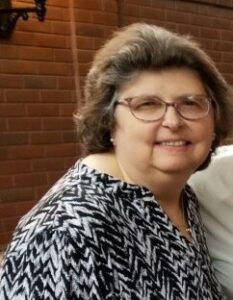 Hudson – Sandra A. (DeLano) Gilchrist, 67, longtime resident of Hudson, died on Aug. 22, 2021, at Lahey Hospital and Medical Center, Burlington. She was the beloved wife of the late Kenneth E. Gilchrist, who died in 2018.

Sandra was born in Pittsfield, daughter of the late Fred H. and Grace A. (Coons) DeLano. She was raised in New Lebanon, N.Y. where she graduated from New Lebanon Central School. Following their marriage in 1981, Kenneth and Sandra spent a short time in Watertown, prior to settling in Hudson in 1983.

Sandra was employed for many years at Robinson’s Hardware Store in Hudson and was very active with the Hudson Catholic Sports Booster Club while her son, Brendon, attended and participated in the sports programs.

She leaves her son, Brendon E. Gilchrist and wife Jaclyn along with their son Caleb, all of Berlin. She was the devoted sister to brother Fred “Bucky” DeLano of New Lebanon, N.Y. and sisters Mary Lou (DeLano) Tyler and her husband Jed of Newburyport and Carol Lynn (DeLano) Green and her husband James of Salisbury Mills, N.Y., and leaves many other relatives and close friends.

Sandra enjoyed meeting many people throughout her career with Robinson’s Hardware Store. She was a dedicated mother and grandmother. She always looked forward to attending her son Brendon’s sporting events and dedicated her free time to the Booster’s Club while he attended Hudson Catholic H.S. Most of all she cherished her times with the family, especially later with her grandson, Caleb.

Family gatherings always resulted in a request for her to bake one of her many recipes and she gladly obliged. She leaves behind a legacy of love, generosity, and kindness she shared with all who loved and knew her.

Visiting hours will be held on Monday, Aug. 30, from 4-7 p.m., at the Tighe-Hamilton Regional Funeral Home, 50 Central St., Hudson.  A service to celebrate the life of Sandra will be held on Tuesday, Aug. 31, at 11 a.m., in the funeral home. Burial will immediately follow in St. Michael’s Cemetery, Cox Street, Hudson.