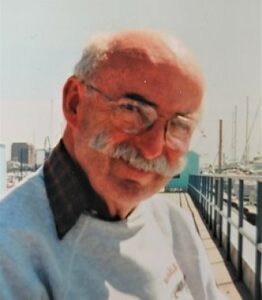 Northborough – Edward W. White, 83, passed away peacefully on Aug. 29, 2021 from complications of Parkinson’s Disease at Coleman House in Northborough.

He is survived by his wife of 54 years Ann “Nancy” (Kane) and their children Thomas and his wife Maureen of Wayland, and James of Northborough, as well as his granddaughter, Fiona. Ed also leaves his sister-in-law, Maureen Kane of Meriden, CT. He was predeceased by his mother, Virginia Boccalatte, his stepfather Mario and his father William White and his half-brother, Harry White of Canton, CT.

Ed grew up in West Hartford, CT and graduated from the University of Hartford’s Ward School of Electronics before going to Raytheon, where he worked for 44 years. As a Field Engineer, he was able to travel the world with Raytheon. He had longer term posts in Oklahoma, Louisiana, Okinawa, Florida, Hawaii, North Dakota, Kwajalein, and finally Waltham and Andover, allowing the family to settle in Northborough.

He was an avid sailor and enjoyed sailing in Narragansett Bay and Boston Harbor in his boat, the “Late Eddy”, for many years. Fellow members of the Boston Boat Yard and Marina in East Boston will remember his greeting “Bring ‘em back alive’ as he would sail into the harbor. Ed also tried his hand at flying and completed his solo flight in 1960.

Ed was a proud member of the AA community for over 42 years and he helped many people on their journey to recovery. At 13 he became a ham radio operator and continued to enjoy talking to other operators all over the world for many years. After retirement, Ed enjoyed spending winters in Pompano Beach, Florida. While living there, he was able to fulfill a lifelong dream to sail through the Panama Canal.

The family wishes to thank the staff at Home Instead, especially Pamela and Steve, whose care and companionship allowed him to stay home for two years. They also want to thank the staffs at Beaumont House, Westboro and Coleman House in Northborough for their compassionate care.

A funeral Mass will be celebrated at 10 a.m. on Friday, September 10, at St. Rose of Lima Parish, 244 W. Main Street, Northborough. Arrangements are under the care of Hays Funeral Home, 56 Main Street, Northborough. In lieu of flowers, the family has asked that donations be directed to the American Parkinson Disease Association, 135 Parkinson’s Avenue, Staten Island, NY 10305.

Northborough Planning Board weighs next steps on warehouse moratorium