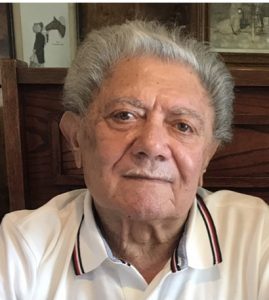 Hudson – Jose Macario de Oliveira was born to Macario and Maria Herminia de Oliveira in Afogados da Ingazeira, Brazil in 1931. He spent his youth on the family farm in Tabira, Brazil, as a gaucho.

He married his beloved Romana in 1953, and they moved to Sao Paulo, Brazil, to start their family and for Jose to begin to hone his skills as a welder. Shortly after, Zenaide, Wilson and William were born, and the young family immigrated to America in September 1966. They settled in Hudson, where the de Oliveiras have been lifelong residents.

Jose spent 30-plus years at Westinghouse, as a Master Welder, working in all forms of the trade. Since his retirement, he has spent countless hours in his impressive garden and fruit trees, working on projects around his house and countless others’ and being by Romana’s side as a staple of their family and community.

Jose was a dedicated, hardworking man, who fiercely loved his family and those who were blessed to call him friend. He will be remembered and missed for his tenacity, strength, loyalty, and most of all love.

In the twilight of his years, he and the entire family have been so grateful for his caretakers, who worked tirelessly around the clock to provide him with the best at-home care anyone could ask for.

In lieu of flowers, please consider donating in Jose’s name to the American Heart Association.

A funeral Mass will be held on Wednesday, Sept. 8, at 9 a.m., in Saint Michael’s Church, 21 Manning St., Hudson. Burial services will be private following cremation. Tighe-Hamilton Regional Funeral Home, 50 Central Street, Hudson is assisting the de Oliveira family with funeral arrangements. There are no services at the funeral home.