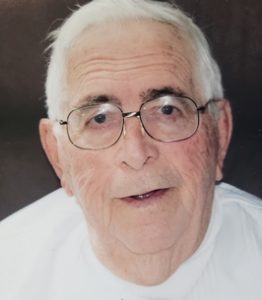 Grafton – Anthony F. “Tony” Kavanaugh Sr., 88, passed away quietly on Sept. 2, 2021, at The Oasis at Dodge Park, Worcester., from complications of Alzheimer’s disease. Born on March 12, 1933, to Lillian Kavanaugh of North Grafton, he was raised by his maternal aunt and grandfather.

After graduating from Grafton High School in 1951, he married his high school sweetheart, “Gwen,” and worked briefly for Washington Mills Abrasives. From 1953-1955 he was in the U.S. Navy, which sent him to electronics schools in several areas of the country. Honorably discharged, he was ever after proud of having served during the Korean conflict. He applied his electronics skills at New England Telephone (now Verizon), proudly rising to level of network manager before retiring in 1988 after 33 years.

For several years he was involved in Grafton Youth Hockey as a coach, and was a lifetime parishioner and supporter of St Mary’s Church in North Grafton. He was later a member of the Grafton Fish and Game, and the Rod and Gun club, and served on several local political committees. For many years he was a columnist for The Grafton News under the pseudonym Kay Whynot.

Aside from his love of family, he liked construction, renovation, repair, and maintenance of home and property. But, his greatest passion was cars, repairing and restoring the value of far more than many throughout his life, and spending his retirement years attending antique car shows and meets throughout the northeast.

A Book of Memories to share a message with Anthony’s family is available at www.RoneyFuneralHome.com.