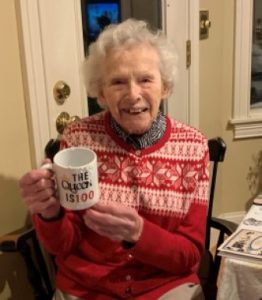 Northborough – Helen Ruth (Arnold) Holden, 100, of Northborough, died on Sept. 1, 2021, in the Chestnut Hill Benevolent Association nursing facility in Chestnut Hill. She was the wife of Timothy G. Holden, who died in 2001, and was resident in Northborough since 2009.

Among those whom Helen is survived by are a son, Gary H. Holden of Lincoln; a daughter, Alison S. DesRoche and her husband Scott; and one grandson, Zachery Todd DesRoche, all of Northborough. Helen also leaves behind her sister, Evelyn S. Wolf and her husband Arnold of Newport News, Va., and numerous nieces and nephews.

She graduated from Scituate High School in 1940. After graduation, she entered Boston’s business world and subsequently helped manage her husband’s business. She was a life-long member of the Christian Science Church.