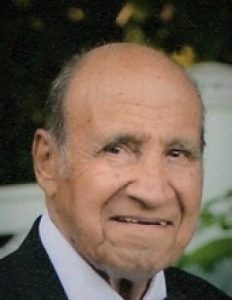 Westborough – Anthony “Tony” Viscomi, 95, of Westborough, died on Sept. 9, 2021. Tony was born on November 18, 1925, in Davoli, Italy. His parents were Rafael and Victoria Viscomi, with siblings Arthur, Joseph and Anna.

His parents immigrated to Brooklyn, New York when Tony was three years old. While in Brooklyn, Tony met the love of his life, Angelina “Angie” Viscomi. Angie could not resist this young handsome motorcycle-driving Italian in his leather jacket. Tony and Angie were married on Sept. 4, 1949 and had three sons, Ralph, Joseph and Michael.

From 1944-46, Tony proudly served in the U.S. Navy, despite the fact that he easily and often became seasick. He was a radar operator, 2nd class, and honorably served during World War II.

Tony and Angie raised their three boys in Hempstead, New York. During that time, Tony worked in the subway system for the New York City Transit Authority. Tony started working on track and signal maintenance and was later promoted to an Assistant Supervisor position. He had a strong work ethic, earned a good living to support his family and for a long time worked the night shift. He was also an all-around handyman when it came to household repairs. He was a true “MacGyver” when it was necessary and never hesitated to enlist the help of his sons (whether they wanted to or not).

When Tony turned 50, after 28 years of service, he retired and moved to Florida, living in Lehigh Acres, Royal Palm Beach and Ormond Beach until they later moved to Shrewsbury. Once there, he became actively involved in the town’s Senior Center where he quickly rose to President. Tony and Angie were much loved by their family and many friends who enjoyed so many activities with them.

Tony had a wonderful sense of humor and loved to make people laugh, and laugh they did! He and Angie also attended many parties and events. With his jokes, costumes and antics, Tony inevitably became the life of many of those parties.

Tony also loved to play cards, board games and pool with his children and grandchildren. Playing cards with him was particularly frustrating because he was a card shark who almost always won.

Tony and Angie had a strong Catholic faith and love of God. Both regularly attended mass and were active participants in their parishes. Tony was also a very proud and active member of the Knights of Columbus, having attained his 4th Degree, the organization’s highest honor.

Tony was a devoted husband, father and “Poppy.” He was preceded in death by his parents, his brothers, and his beloved Angie.

Relatives and friends are respectfully invited to attend a Mass of Christian burial on Thursday, Sept. 16, at 10 a.m., in St. Mary of the Hills Church, 630 Cross St., Boylston. Interment with Military Honors will follow at Mountain View Cemetery, Shrewsbury. In keeping with the Covid-19 guidelines, all attendees are kindly asked to wear face coverings and practice social distancing while at the church and cemetery.

In lieu of flowers, the family requests that donations be made in Anthony’s name to the American Kidney Fund (https://www.kidneyfund.org/get-involved/ways-to-give/).