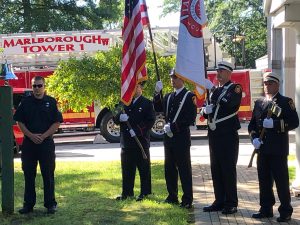 Signal 5-5-5-5 remains the New York Fire Department’s signal to indicate when there is a line of duty death.

Three hundred and forty three firefighters died in the collapse of the World Trade Center towers on 9/11. Many more have since passed due to 9/11-related illnesses.

In addition to the 343 firefighters, there were 60 police officers from the New York Police Department and the New York/New Jersey Port Authority, eight paramedics, and 2,852 civilians who died in the terror attack.