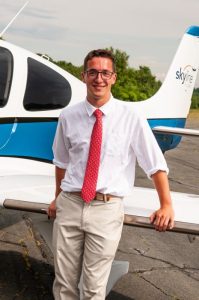 Stow/West Boylston – Beloved son, brother and friend, Andrew Francis St. Denis, 26, of Stow and West Boylston, died suddenly and unexpectedly along with his 5-year-old dog, Chance, on Sept. 11, 2021 in a motor vehicle accident.

Andrew was born in Hudson on March 14, 1995, the son of Adele Kane Hill of Stow and Michael St. Denis of West Boylston. Andrew was the second oldest of four sons and spent his childhood and formative years in both Hudson and on Lake Boon in Stow.

Andrew attended St. Anne Montessori School in Marlborough for two years, then St. Michael’s Grammar School in Hudson through the seventh grade. While at St. Michael’s, Andrew served regularly as an Altar Boy for the St. Michael’s Parish. He continued 8th grade through Hudson High School, graduating in 2013. While there he played on the Varsity Golf Team for five years and was Team Captain Junior and Senior year.

He studied at Daniel Webster College (concentration aviation) in Nashua, NH for one year, where he was also a member of the Golf Team. He graduated with a Bachelor of Arts Degree in Communications from the University of Massachusetts in Boston in 2017.

During his youth and teenage years, Andrew was an avid and accomplished snowboarder competing on the Snowboarding Wachusett Mountain Extreme Team for four years, in USASA Boardercross and Slope Style events in the New England Region and Nationals at Copper Mountain, Colorado. Over time, Andrew boarded slopes throughout North America in the United States and Canada, Europe, Japan, and South America.

When Andrew was not on the golf course or snowboarding, you could find him water skiing, wake boarding, perfecting 20-foot rope swing dives on Lake Boon, dirt bike riding on Chestnut Street or traveling the globe. He always tried to do new things and encourage those around him to do so as well.

In January 2016 while in Colorado on a family snowboarding vacation, Andrew suffered a life-changing lumbar spinal injury fracturing most of his lumbar vertebra. His recovery involved adopting a Maine-borne Native American Indian dog whom he named “Chance” (after the movie star dog in Homeward Bound). At this point, he turned his interests and career towards the family pursuit of aviation.

He accomplished his Single Engine Land First Flight Solo at the age of 17 in a Cessna 152.  Studying at the FCA Flight Center in Fitchburg, Andrew received his Single/Multi Engine, Commercial, Instrument, and Certified Flight Instructor/Instrument Instructor Ratings. He then flew as First Officer for PlaneSense of Portmouth, NH, for two years in a Pilatus PC12 on both domestic and international routes. At the time of his passing, he was training for his Airline Transport Pilot license with Republic Airways, a Delta Connection, to fly an 80-passenger twin engine jet Embraer 170/175. In his spare time, he was also working towards his Solo Jump Certificate at Jumptown Skydiving in Orange.

Andrew was fearless in life; a genuine soul who marched to the beat of his own drum who counted many friends along his way. He found passion in animals and loved his best friend, Chance, fiercely. We all take comfort in knowing that Andrew and Chance were inseparable to the end. Clearly, Andrew lived life to the fullest, and a true example of the snowboard expression “Go Big or Go Home.”

There will be calling hours at the Tighe Hamilton Regional Funeral Home on Friday, Sept. 17 from 4-7 p.m. A Mass of Christian Burial will be celebrated on Saturday, Sept. 18, at 9 a.m., at St. Michael Church. Interment will follow at St. Michael Cemetery, Hudson.

Memorial donations may be directed towards the program “NEADS World Class Service Dogs” in Princeton for dogs that change lives; https://support.neads.org/give/218255/?utm_source=site&utm_medium=button&utm_campaign=home#!/donation/checkout