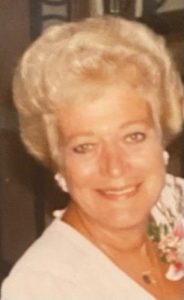 Westborough – On Monday, August 30, 2021, Betty Ann I. Marino, a loving wife, mother, grandmother, and great-grandmother passed away at the age of 87. Betty Ann was born on July 27, 1934 in Marlboro, MA to Raymond Sr. and Louise Belmore. She was one of three children.

Betty Ann graduated from Marlboro High School in 1952; where she was voted best athlete; a veteran cheerleader, star basketball playmaker, an exceptional field hockey player and semi-pro softball pitcher. She was the vice president of her senior class and was a part of many committees and clubs.

On May 23, 1954 she married her high school sweetheart, John P. Marino. They raised a daughter and two sons in Westboro, MA. Betty Ann was an executive secretary at Data General for many years.

Betty Ann enjoyed playing bingo, card games and watching movies. She had a strong passion and talent for knitting & crocheting. There is not one person that she came across that did not receive a homemade knitted gift. She took great pleasure in giving to others. Betty Ann was also an avid and knowledgeable football fan, and loved sharing that with her family.

Betty Ann and John became residents of Ellenton, FL in 2002 but spent many summers at Black Bear campground in Salisbury, MA and enjoyed quality time with their grandchildren at Hampton Beach. Most recently, they spent their summers at Strawberry Park in Preston, CT where family and friends liked to gather together. Betty Ann cherished her time spent with her sister, Rosemary; shopping, going to lunch and having her over along with her husband to play dominos. Betty Ann was the one that everyone called and was there to talk to, day or night. She was truly the heart of the family.

Betty Ann was preceded in death by her father Raymond, mother Louise, her brother Mickey and sister Rosemary. She is survived by her devoted husband of 67 years, John, her three children- Janice, Jack, and Mark, her daughter-in-law- Mary Ann, her seven grandchildren- Alex, Nick, Jamilee, Erica, Amanda, Lucas and Tessa; her eight great-grandchildren with two more on the way.

Betty Ann, known as “Meem” to most, will be remembered for her kind, thoughtful, and generous heart.

A Celebration of Life will be held with family and friends at a later date.