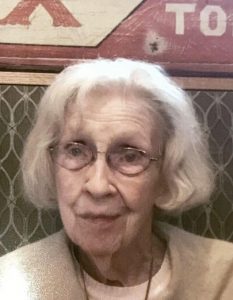 Marlborough – Ruth Marie (Cody) Sobol, passed away on Sept. 19, 2021, at Christopher Heights of Marlborough, after a period of recently declining health and after living a long, healthy life of nearly 98 years.

She was predeceased in 2010 by her loving husband of 54 years, Costa Sobol, and by her brothers, Francis and William Cody.

Mrs. Sobol leaves her children, Joseph M. Sobol and his wife Barbara of Portsmouth, NH and Maryellen Twomey and her husband James of Hudson, MA and as well as 4 wonderful grandchildren Caroline and Brian Twomey and Peter and Nathan Sobol.

Ruth was born to Michael and Mary (Reilly) Cody in Worcester, MA in 1923 and graduated from the High School of Commerce in Worcester, class of 1940.

She worked for many years (starting in the 1940s) for the Boston & Maine Railroad in Worcester, Boston and Billerica and in 1969 she became the first woman promoted by the B&M to Management as a Divisions Rate Analyst, where she travelled and worked cooperatively with colleagues of other Railroad Companies across the United States.  She retired after working over 40 years from the B&M Railroad in 1985.  Prior to working for the B&M, Ruth worked as a talented dance instructor for the Arthur Murray Dance Studio in Worcester in the 1940s and 50s.

Throughout her life she was devoted to her adopted rescue cats and dogs, namely Simon, Boston Blackie, Duke, Mookie, Molly and Erie. She was an avid reader and also enjoyed keeping her mind sharp by doing crossword puzzles herself daily and with her grandchildren.

She travelled three times to Ireland and researched her Irish Ancestry and Family homesteads in Counties Kilkenny and Mayo, with friends and family members and spoke lovingly of her Ireland born father and mother. After her father’s death in 1941, when Ruth was only 17 years old, she worked tirelessly at a variety of jobs in Worcester to help support the family during the latter stages of the Great Depression and WWII. These experiences deeply shaped her life.

After her retirement she attended Quinsigamond Community College, was an active member of an Investors Group at the Northborough Senior Center and was a devoted member of the Woman’s Bible Study at Immaculate Conception Parish. She donated to numerous charities throughout her life.

The family wishes to thank the Staff of Christopher Heights of Marlborough for their loving care, where Ruth became a resident earlier this year, after living for over 65 years at her home on Brigham Avenue.