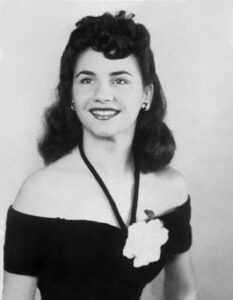 Hudson – After a life filled with making music, singing, painting, entertaining and performing, on September 25, 2021 the final curtain fell for Gloria C. White. She was the loving wife of Denis White.

Gloria was the daughter of Domenica and Adolph Paolini and was raised in a loving home filled with music. She was educated in the Westborough public schools and Becker Junior College. As a young woman she studied voice under the direction of Mrs. Priscilla Larabee of New York City. At the age of 17, she entered a vocal competition, coming in first out of thirty other vocalists.

At times better known by her stage name, Gloria Paul, she had a long and interesting performance career which began with her singing on the radio at the age of thirteen. Later, in the era of Big Band music, she sang with the popular dance bands of New England, traveling throughout the region. During the Second World War, Gloria performed at officers’ clubs, veterans’ hospitals and military bases, receiving many tributes from her admirers including several poems composed in her honor after hearing her sing.

Later she sang professionally at many churches and served as choir director where she enjoyed performing, producing and directing musicals. Toward the end of her career, she brought joy to nursing home residents by sharing her love of music, which brought much joy to her as well.

After retiring, Gloria and Denis spent many happy years on Cape Cod making a lovely home, planting flower gardens, being active in their community, enjoying their grandchildren and appreciating the beauty of the Cape. She took pride in creating a beautiful home, loved to entertain and would set a beautiful table for her guests. She especially loved the holidays, thoughtfully decorating for each one throughout the year.

Generous and loving, Gloria had a wide network of friends and acquaintances and kept her bond with them intact, even as the years passed and friends were scattered. A matriarch and diva, she kept her large extended family connected to each other and to family history. She cherished her relationships with each family member, their spouses, and every new addition to the family. Her relatives will miss her phone calls checking in and sharing all the family news. Her neighbors will miss the sound of her piano as they walk past her door.

Gloria had a physical limitation from birth, but never thought of it as a reason to hold her back or to define her, as evidenced by her accomplishments and joy for life.

Gloria leaves her dear husband, Denis White, her stepson Michael White and his wife Jane, her stepdaughter Janice O’Connell and her husband Thomas, six grandchildren and their spouses, and five great grandchildren. She also leaves her grandson Joshua Lee Smith, his wife Wona, and their two children. She is predeceased by her five brothers: Rocco, Guido, Serafino, Henry and Ernest, and her seven sisters: Rose, Margie, Jeanne, Mary, Bernice, Ida and Terry. She was aunt to their many children – 22 nieces and nephews who she loved dearly. She also leaves her nieces and nephews of the Fask family.

Donations may be made in her memory to Boston Children’s Hospital.