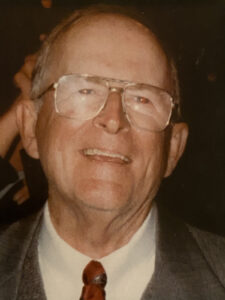 Marlborough – Mark J. Cross, 98, of Marlborough, MA passed away September 22nd after a short illness lovingly surrounded by his wife and daughters. Born in Bar Harbor, ME in 1923, he was the son of the late Lambert and Katherine (Silk) Cross and for sixty-two years the devoted husband of Janet (Slamin) Cross.

Mark, known as Bud, grew up in Concord, NH. He was a paperboy for the Concord Monitor, loved riding his bike with no hands, and skating and playing hockey at White’s Pond. Another of his early jobs was head usher at the Capitol Theater in Concord. Upon graduating from High School, Mark enlisted in the U.S. Army and served honorably during WWII in Italy and North Africa.

After the war he came home to New Hampshire and graduated from Keene State College where he studied education. He taught for two years in New Hampshire then changed course and began his career in Human Resources. This was a natural fit for him as he was a good listener and took a genuine interest in others.

He lived most of his life in Marlborough, MA where he and Janet raised their three daughters. He was a member of St. Matthias Church, an avid golfer, and in his retirement volunteered at Marlborough Hospital for many years.

Mark will be remembered for his kindness, his peaceful nature, and his graceful dance moves which his wife, Janet said, ‘Made me look like I knew what I was doing.’ In his last months he was delighted to watch his great-granddaughter, Lucy, grow and change. She brought him immense joy.

In addition to his wife Janet, he is survived by his daughters; Susan Hett and her husband Eric of York, ME, Marcia Cross and her husband Tom Mahoney of CA, Ellen Cross and her husband Andrew Finton of Watertown, MA, his grandchildren Amanda, Laura, Jared, Natalie, Lillian, Savannah, Eden, his great-granddaughter Lucy, and his sister-in-law Angela Cross of Maine. He was also the brother of the late Theodore and Robert Cross, and sisters Barbara Burns and Nancy Lugg.