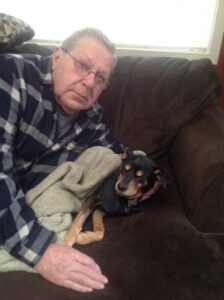 Milford, N.H. – Terrill W. Wright, 78, of Milford, NH, formerly of Marlborough, MA, died Friday, September 24, 2021, at his home following a lengthy illness. Born March 17, 1943 in Newport, VT, he was the son of the late Kenneth and Isabelle (Sanville) Wright and the husband of Jacqueline “Jackie” (Labossiere) Wright. They were married for 59 years.

Most called him “Short”, a nickname from childhood and as time went by others would become to know him as “Terry”. He worked alongside his two brothers, Donald and Wilford Wright at Wright Brothers Construction Corporation (WBCC) in Marlborough, MA during the late 1960’s throughout the 1970’s. From there he started his own trucking Company, K&T Transportation, driving until his health prevented him to semi-retire a few years back.

Short had a variety of hobbies throughout his life. In the 1980’s, he loved to race cars at Westborough Speedway and Thompson’s Point in Thompson, CT. During the winter months he was fond of snowmobiling, venturing back to Vermont with his family to ride. Short also loved his weekend getaways to New Hampshire with Jackie so the two of them moved to Milford, NH this past summer.

Besides his wife, Short is survived by his two sons, Timothy Wright and husband Jeff Fongeallaz of Wilton, NH and Keith Wright and his partner Freddy Abarca of Spring Valley, CA., his only grandson, Anthony “Zach,” Wright, his brother Wilfred K. Wright and wife Claudette of Oklahoma, and sister-in-law Alice Wright of Marlborough, MA. He was predeceased by his brothers and sisters, Donald, Arnold, Phyllis, Lucille, and Gail.

Donations may be made to the Humane Society for Greater Nashua, 24 Ferry Road, Nashua, NH, 03064 https://www.hsfn.org/tributegifts/.

‘Come rest your bones’ at The Haunted Borough in Marlborough