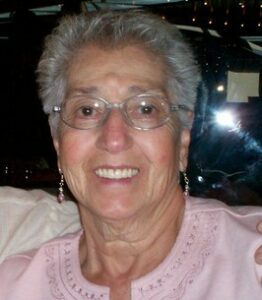 Marlborough – Theresa (Giarrusso) Elbe of Marlborough, formerly of Northborough, passed away peacefully on Thursday, September 23, 2021 after a period of declining health; she was 89 years old.

Theresa was born in Brooklyn, New York, the daughter to the late Theresa Giarrusso. She was raised in an orphanage and attended the (former) Hope Farm – Greer School in Dutchess County, NY. In 1949, at the age of 17, she relocated to Northborough where she served as a nanny.

In 1951 Theresa married the love of her life, Stanley N. Elbe. This was the beginning of a 69 year marriage together; Theresa and Stanley looked forward to celebrating their 70th anniversary this year on December 5. For 30 years Theresa remained employed as a waitress at the White Cliffs in Northborough. She was a longtime member of the Northborough Garden Club, the American Legion Post 234’s Auxiliary Unit, and was active at the Northborough Senior Center. Theresa was a generous soul who enjoyed cooking for those she loved. The couple remained residents of Northborough until their recent move two years ago to Marlborough.

A calling hour will be held from 9:30- 10:30 a.m. on Monday, September 27, at Hays Funeral Home, 56 Main Street, Northborough. Theresa’s funeral will follow at 10:30 a.m. in the funeral home. Burial will follow in Worcester County Memorial Park, Paxton.

The use of masks for all inside services is recommended.