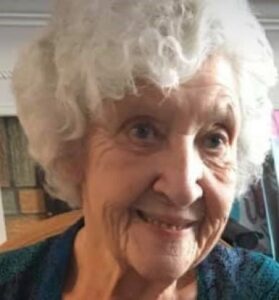 Northborough – Joan Marie (Hourihan) Hill, passed away on Saturday, September 25, 2021, at Coleman House in Northborough MA, after a period of declining health and after living a long, healthy, happy life of 90 years.

She was pre-deceased in 1997 by her loving husband George F. Hill, Jr.  She is survived by her brother Thomas Hourihan Jr. and his wife Clare;  her children Michael Hill, who was pre-deceased by his wife Monique and Marie-Elena Hill-Eilertsen and her husband Daniel; 2 granddaughters Tara (McNamara) Horeluk and her husband David, and Shila (Hill) O’Reilly and her husband Mark; 3 great grandsons: Sage Horeluk and his fiancée Chadsey O’Neill, Gavin O’Reilly and Owen O’Reilly; 2 great-great granddaughters Summer Horeluk and Ginora Horeluk.  Many nieces, nephews, cousins, relatives and friends. She was very close to George’s family and his siblings were like brothers and sisters to her.

She was born to Thomas and Mary (Fleming) Hourihan, Sr.  in Boston, MA in 1931 and grew up in Brookline, MA. She attended St Mary’s School in Brookline for 12 years and graduated in 1949.

Joan was very proud of her father, who was a Brookline Police Officer, and her grandfather who was a detective in Boston and helped solve some of the biggest cases in the Boston area.  Her father died at a young age, she was only 15 when he passed away.  Her mother fell into a depression when her husband became ill and Joan took on much responsibility when a young teenager.  After her father passed, she got a job at the Coolidge Corner Theatre as the Candy Girl.  She worked after school and gave most of her pay to her mother to help out.  She took her little brother Tom under her wing and made sure he had everything he needed.

She started dating George at age 15, not long after her father died.  They fell in love and wanted to marry, but George was Protestant. In those days it was unacceptable for a Catholic to marry a Protestant.  So, they decided to elope when she graduated from high school.  They left for New Hampshire after her graduation and married on July 2, 1949.  They lived in Concord New Hampshire for a few years and their son was born there.  Joan’s mother became ill, and was unable to work, so they decided to move back to Brookline to help out (Tom was planning on attending College and they wanted to be sure he was able to attend).  They remained living in Brookline for many years, and their daughter was born there.

They moved to Marlboro in 1965, where Joan worked for many years at the Fenton Insurance Agency.

Joan’s favorite place was York Beach, Maine.  She first went there when she was 12 years old and fell in love with it.  The house they stayed in was a big, beautiful house on Roaring Rock Road.  Her Aunt worked for the owner of the house and he gave them vacation time there.  Joan and her cousin could look out the window of the 3rd floor bedroom they slept in and see the ocean just a stone’s throw away.  She introduced her family to York and had many happy vacations there over the years.  We were able to celebrate her 90th birthday at York before she fell ill.  The house we stayed in was also overlooking the ocean and we celebrated with her children, grandchildren, great grandchildren, and great-great grandchildren all there to spend this important birthday celebration with her.

Throughout her life she was devoted to her family and friends.  Joan and George lived their lives helping and being supportive to family members and friends.  And they had lots of fun along the way.  They stuck together through the ups and downs of life and it only made their relationship stronger.  They were proof that money is not the most important thing in life. Their unconditional love for each other and for others and their generous natures touched so many in their lives.

The family wishes to thank the Staff of Coleman House, Northborough for their loving care. Joan became a resident there in July, after living independently since her husbands death in 1997.  She wanted to remain living independently for as long as possible and her loving family helped her make that possible, giving back to her all the love and support that she gave to them over the years.

A funeral mass will be held on Friday, October 8 at 10:00 a.m. at St Matthias Church, Marlborough.  Burial will follow at Evergreen Cemetery.  There will be no visiting hours at the funeral home.