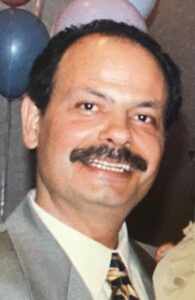 Auburn – Andreas Perdikomatis, 71 of Auburn and formerly of Marlborough, died on Saturday, October 2, 2021, at his home surrounded by his loving family.

He was born in Kanakades, Greece, the son of the late Spiridon and Xanthi (Moumouris) Perdikomatis. He owned and operated several restaurants retiring in 2021.

Andreas lived and breathed for his family. A simple man with a beautiful heart of gold.

A Funeral Service will be held on Thursday, October 7, 2021, at 11 a.m. in Sts. Anargyroi Greek Orthodox Church, 9 Central St., Marlborough, MA. Burial will follow in Hope Cemetery, Worcester, MA. Calling hours will also be held at the Church prior to the Service from 9:30-11:00 a.m.