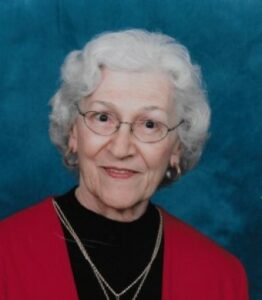 Anne attended Immaculate Conception’s middle school in Marlborough prior to graduating in 1937 from Northborough High School. She trained at the former Traham’s Beauty Academy in Worcester and operated Anne’s Beauty Nook prior to making the decision to enlist in the United States Marine Corps – Women’s Reserve After training at Camp Lejeune, Anne honorably served her country before being discharged with the rank of Corporal.

After the war Anne lived several years in Beverly Hills, California prior to relocating for the final time to Northborough. While in California Anne continued her stylist career in several salons on Rodeo Drive where she had several Hollywood stars as clients. Upon her return to Northborough she oversaw the beauty services at Cushing General Hospital. Anne also served as a clerk in the City of Marlborough’s Assessor’s Office until her retirement in 1992.

A devoted Catholic, Anne was a longtime active member of Saint Bernadette Parish in Northborough. Here she was a founding member of St. Bernadette’s Alter Society, served with the bereavement committee, was a longtime Eucharistic minister within the parish as well as many other acts of devotion to the ministry of the Church. In her younger years, Anne enjoyed bowling, tennis and basketball.

Anne also never forgot those who, like herself, served their Country. Since her joining of the American Legion in 1948, Anne volunteered countless hours collecting, assembling and sending care packages to the active duty men and women. In 1992, Anne was nominated Veteran of the Year by the Vincent F. Picard American Legion Post 234 in Northborough.

Surviving Anne are two nieces, Elaine M. Colacchio and her husband James Schoolcraft of Bolton and Dorothy (Falco) Thompson; three nephews, William “Bill” Marino and his wife Patricia of Yarmouth, MA, John Mariano of Sarasota, FL, and Ronald Marino and wife Debbie of Orlando, FL. She was preceded in death by her beloved husband, Joseph Falco in 1979, by her parents, her step-father James Buchanan, her brother, Bernard D. Colacchio, Sr. and her nephews, Bernard D. Colacchio, Jr. and Anthony Marino.

The wearing of masks and the practice of social distancing is encouraged while attending services inside.

The family respectfully request that in lieu of floral tributes, contributions be made to Veteran’s Inc, 69 Grove St, Worcester, MA 01605 (veteransinc.org).