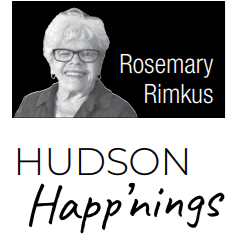 Rocky was a Hudson teacher for 35 years, an HHS tennis coach for 15 years and an HHS basketball coach for five years.

The party was arranged by his wife, Nancy, and their twin sons, Liam and Robbie, 20. It was attended by many friends, former co-workers and relatives.

Among those attending were Rocky’s tennis buddies of the past 15 years, who divide their playing time between Riverside Park, Rocky’s home court, and Wayside Racquet and Swim Club during the winter.

During COVID-19, the “die-hards” devised a net and played outside from November to late January.

Hudson native John “Jack” Costedio, and his wife, Joanne, celebrated 70 years of marriage on Sept. 15. They observed the event with a party at their residence in Sun City, Arizona.

“Jack” was born in Hudson, and the couple resided here until his retirement from Highland Land Surveyors about 30 years ago.

Among those attending were the couple’s four children, Debbie, Jack, Jan and  Jim. The family also includes nine grandchildren, and 18 great-grandchildren.

Haley won her Junior World Class figure event at Nationals in Iowa last month, and took ninth place in her first appearance at the World Championships in Paraguay on Sept. 29. She was happy to be in the “top ten” in her first World competition.

St. Michael Parish’s Autumn Picnic and Fair will take place Sunday, Oct. 17, starting at 11 a.m. at the Pavilion at the Hudson/Concord Lodge of Elks on Park Street.

The program will include a pie-baking contest, a chili contest, trivia games, kids’ games and food.

Butch Lucius Wetherell will preside at Elks Karaoke Night on Saturday, Oct. 9, from 7 to 10 p.m. at the members’ lounge at 99 Park St., for members and guests.

Funeral services were held for Earl V. Aldrich, 67, architect for the new First Federated Church and other local structures.

Mrs. Mary Morey joined the staff of the News-Enterprise.