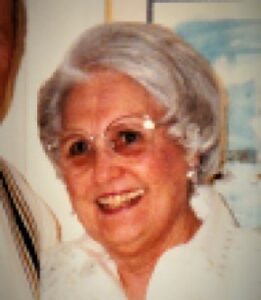 Shrewsbury – Adelaide M. (Staplin) Rogers, age 99, of Shrewsbury, MA and St. Martin, formerly a longtime resident of Northborough, passed away early in the morning on Thursday, October 14, 2021. She was the devoted wife of 73 years to Albert A. Rogers until his own passing in March of this year.

Adelaide is survived by a son, Albert Rogers II of Northborough, MA; three grandchildren, Jill Becker-Witherell of Louisville, KY, John Anthony Becker of West Boylston, and Albert Rogers III of NH. She was preceded in death by her daughter, Anna Karbowski of W. Boylston in 2019.

Born in North Brookfield, MA, Adelaide was a daughter to the late William A. and Anna (Perrin) Staplin. She lived many years in North Brookfield, Northborough, Worcester and Shrewsbury. She attended Simmons College (a Bouvé Boston School) for Physical Therapy. Upon graduating, Adelaide worked at Mass General Hospital in Boston as a Physical Therapist.

Once she moved to Northborough she worked as a substitute teacher at Tahanto High School in Boylston and Girls Trade School in Worcester among other local schools. She was also a Real Estate Broker and worked many years in Worcester and surrounding towns.

Adelaide “took in” and cared for abandoned, abused and sickly dogs. Some of which were rehabilitated and went on to N.E.A.D.S. (National Education for Assistance Dog Services), where they were trained for helping people with disabilities.