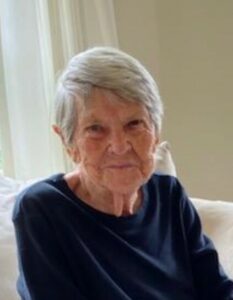 Westborough – Agnes I. Burgess, 90, of Westborough, passed away peacefully on Wednesday, October 13, 2021 at home. She was the wife of the late Francis P. Burgess.

Born in Lakeville, MA, she was the daughter of the late John and Mary (Moore) Murdoch. She was raised and educated in Lakeville and graduated from Middleborough High School.

Agnes was an administrative assistant for the Westborough Public Schools prior to her retirement.  She was a communicant of St. Luke the Evangelist Church and enjoyed spending summers at Misquamicut Beach in Westerly, RI and winters in Myrtle Beach SC and Naples Florida.

She is survived by three children, Paul Burgess of Worcester, Robert Burgess, his wife Sandy of Westborough and Mary Lane, her husband Dave of Upton, and three grandchildren, Lindsay Burgess, Michelle Burgess and Benjamin Fay. She was the mother of the late Donna (Burgess) Fay and Dean Burgess.

Her funeral Mass will be celebrated at 12 noon on Saturday, October 23rd, in St. Luke the Evangelist Church, 70 West Main St., Westborough. There are no calling hours.

In lieu of flowers, donations can be made to one’s favorite charity.