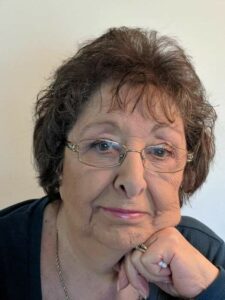 Hudson – Aida (Nordelo) Braga, 84, of Hudson, died at home in the company of her loving family on October 17, 2021, after a period of declining health. Aida was born in Santa Maria, Azores, Portugal in 1937 to the late Jose and Maria (Chaves) Nordelo.

Aida moved to Hudson in 1951, attended Hudson Schools and married Robert, the love of her life, in 1956.  She is predeceased by her husband who died in 2011 and her daughter Deborah, who passed in 1977.  She leaves her daughter Robin Zagwyn, of Hudson, her husband Robert, her grandson son Kevin Sullivan and his wife Jennifer, granddaughters, Erynn (Zagwyn) Brun and her husband Daniel and Erica (Zagwyn) Cusson and her wife Leah. She also leaves four great-granddaughters Sophia and Ella Sullivan, and Amelia and Milah Brun and three great-grandsons Jaxon and Owen Sullivan and Micah Brun. She was the sister of Aprigio “Pete” Nordelo of California, Joseph Nordelo of Milford and Leona Silva of Hudson. She also leaves her sister-in-law Elaine Braga of Hudson, and many nieces and nephews.

She worked at several local companies over the years including Ascutney Shoe, Thomas Taylor’s, the Lance Corporation and Telemeds.

Aida was the nucleus of her family and her home was always open to them and to her many friends that were forever present knowing that they were welcome whether they called ahead or not. Despite all that traffic, her house was always immaculate presenting as if no one even lived there.

Aida was also an accomplished cook who enjoyed experimenting with new recipes that she saw in magazines or on the internet. If company happened to stop by, they were wise to come with an empty stomach, as they were guaranteed to be fed and later handed a doggie bag that would surely satisfy them for a future meal.

Aida was a lover of all animals and spent as many hours watching birds at her many feeders as did her beloved cat, Peonie.

In earlier times, Aida loved spending time with her husband in southern Maine, particularly in Wells Beach where they owned a summer home. She also treasured a return trip to Santa Maria in 2009 with her sister Leona, which was the first and only visit to her childhood home since she left some 58 years before. Aida was a devoted member of St. Michaels Church and was truly loved by all who knew her.

In lieu of flowers, donations in memory of Mrs. Braga may be made to her favorite charity:  St. Jude Children’s Research Hospital, 262 Danny Thomas Place, Memphis, TN  38015 or at www.stjude.org.