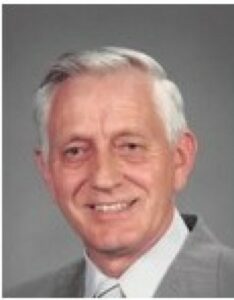 Shrewsbury – Donald A. Johnson, 95, passed away peacefully on the evening on Oct 13, 2021 at the Knollwood Nursing Home. He had been living at Briarwood in their independent living options since 2011. Previously he was a long-time resident of Shrewsbury.

Don was born on June 29, 1926 in Worcester, the third child of Helmer C. and Lillian W. (Werme) Johnson. He attended Worcester public schools before serving in the Army Air Corps in WWII when he was stationed in the Philippines.

Upon his return he attended Worcester Junior College while beginning his lengthy employment with Mass Electric (New England Power Company) starting as a draftsman and upon retirement some thirty-five years or so later as a Design Engineer. He always had a second job, but he is most well-known from his thirty-five years with Spag’s where he worked in the housewares department. His ability to be precise and accurate brought him to be affectionately known to customers as the ‘shade man’ as he correctly custom cut numerous shades for the Spag’s customers.

He was active with the Boy Scouts of America for many years, achieving the highest rank of Eagle Scout, and later becoming a Scoutmaster for Troop 60 of Worcester. He spent many weekends at Treasure Valley, and for a period of time, was a Scout leader along with his father.

More important than his employment which filled his days (and then some), was his devotion and dedication to his wife, Rosemary (Kearney) Johnson (of course no one knows her by that name as she has always been called Sis) and to his family. They had been married for 71 years.

Everything that he did he did in the hopes of making life easier and better for Sis and for their family. He moved to suburbia (Shrewsbury) from apartment living in the city of Worcester to provide better opportunities for his four children. He planned many summer vacations to the Cape for decades or numerous camping trips up and down the East Coast creating memories that continue in the minds of his children. Because of his love of traveling he and Sis visited the Canadian Rockies, Nova Scotia, Prince Edward Island, the Caribbean, Africa, Alaska, and Denmark, Hawaii.

He was a gentle man; some would say reserved in the way that he didn’t reveal his own feelings. He was a product of the Scandinavian culture (his own grandparents all had traveled from Sweden to settle in Worcester) and he lived by the creed that no one person was more special, smarter, or more important than anyone else. So, there is much about Don’s abilities and skills that we will never know because he did not have the need to share about himself with others.

After retirement, he enjoyed the cultural and social events that were available to him through the Shrewsbury Historical Society, the Greendale Men’s Club and the Shrewsbury Men’s Club. He could reiterate with accuracy the new facts that he gained from their ‘programs’. He continued his involvement with these groups when he moved to the Briarwood Retirement Community in 2011 where he was able to enjoy their cultural program as well. He volunteered whenever asked, but most memorable was the work he did with Park St Church in Worcester when he and a very few other people

assembled and delivered Thanksgiving baskets for those in need in the congregation. He kept mentally engaged with these opportunities and by continuous reading and watching documentaries. His love of history combined with his ability to be precise brought him to his serious hobby of stamp collecting.

The life that he had would be an inspiration to anyone – his family was blessed to have had his influence in their lives. We, his children, have been blessed with his presence in our lives – Gail Pessolano of Shrewsbury, Carleen Johnson and her husband Tom McWalters of Thorndike, Maine, Stephen and his wife Melanie Johnson of Holden and Jeff Johnson and his wife Suzette of West Boylston. We would like to thank everyone for the support and friendship that they have shown Don and Sis over the years.

Keep Sis in your thoughts as she adjusts to her different life without him.

In keeping with Don’s wishes, private services were held for immediate family members.