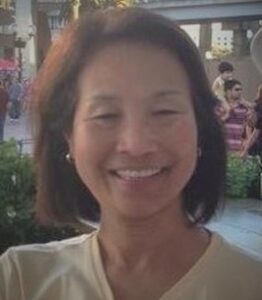 Northborough – Yuh-Rong Tsay passed away quietly, early the morning of October 17, 2021. She lived enthusiastically; and was especially grateful for the last 20 years she continued to lead a vigorous life in spite of metastatic breast cancer.

Yuh-Rong chose to stay in the US to work for Digital Equipment Corporation in Massachusetts. She continued to work in the Computer and High-Tech industry in Massachusetts for her entire career as a respected Quality Assurance Engineer.

Her son, Hou Eric Hsu was born in 1989 the year before she settled in Northborough. She and Eric quickly found a happy place in the community, with school activities, town sports, scouting, and Sunday afternoon Chinese school. Eric’s friends would come from far and wide to experience Yuh-Rong’s famous cooking.

She met Richard Smith in 1999, and they married in 2002. They both loved travelling and dining out. They visited five of seven continents during their life together, except South America and Antarctica (both still on the to do list). She loved mountains and Richard loved the sea, so ocean cruises always included ports of call with rugged terrain; and adventures far from the ocean always included beautiful lakes. There were many trips back to Taiwan to visit her parents and extended family, and holidays in Texas to visit Richard’s family.

After early retirement, Yuh-Rong found hidden talent in many new interests. Her artistic ability developed with an enthusiasm for ceramics, quilting, needle point, painting, and knitting. The athletic side of her returned with vigor in the last few years with the discovery of Pickleball. Pickleball fit Yuh-Rong perfectly; combining exercise, competition, and adding new friends to the large, loving crowd always around her.

A calling hour will be held on Wednesday, October 27, from 9 a.m. to 10 a.m. at the Chinese Gospel Church of Massachusetts, 60 Turnpike Road, Southborough. Yuh-Rong’s funeral service will follow at 10 a.m. in the church. Interment will take place at the Howard Street Cemetery in Northborough. The use of masks is required during the services at church.

To leave a condolence for Yuh-Rong’s family, please visit www.HaysFuneralHome.com.