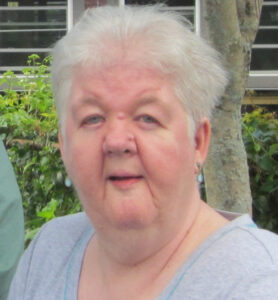 Marlborough – On October 27, 2021, Cecile Ann (CeCe) Lekstrom passed away at age 77 at Beth Israel Deaconess in Boston. Beloved sister of Judith (Lekstrom) LaDrew, Barbara Lekstrom and the late Leonard Lekstrom Jr., Cecile was born in Cambridge, MA and lived most of her life in Marlboro, MA. Her late parents were Leonard and Jessie (“Scottie”) Lekstrom, also of Marlboro.

Mentally handicapped from birth, CeCe was able to proudly live her latter decades semi-independently in her own apartment with the loving support of The Bridge of Central Massachusetts, later known as Open Sky Community Services.

CeCe was a person of strong opinions who knew what she wanted and spoke up for herself. In 2019, recognizing the effects of ageing and her need for more support, CeCe wisely made the decision to move from apartment living to a Dedham group home managed by the Department of Developmental Services, Metro Residential Services.

Socializing with friends and watching old television shows, especially “I Love Lucy,” were two of the greatest pleasures in CeCe’s life. In her younger years she enjoyed knitting. She also had an uncanny ability to memorize the birth dates of people she’d met, however briefly, and retain that information forever afterward.

Ms. Lekstrom worked in Waltham for many years as a motel chambermaid, followed by several years of volunteer work at the Marlboro Girls’ Club.

The Lekstrom family feels particularly grateful to the kind and compassionate staff members who work for the organizations mentioned above and made it possible for CeCe to live with dignity and pride. We give our heartfelt thanks.

A burial will be held at a later date.