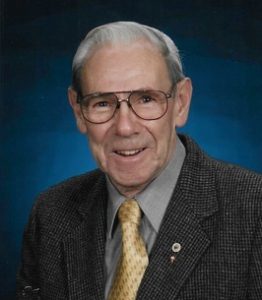 Northborough – Richard J. Weir, Sr., age 91, passed away peacefully in the early hours of Monday, November 1, 2021 after a period of declining health. He was the dedicated husband of 70 years to Mary E. (Morgan) Weir and a proud U.S. Navy veteran of the Korean War.

Born in Worcester, Dick was one of six children born to the late Archie and Rose (Mineau) Weir. After attending high school Dick enlisted in the U.S. Navy where he honorably served his country. Upon his return home Dick began his 54 year employment with Standard Lock Washer, Inc. of Worcester, retiring in 2001.

As a youngster of modest means, Dick worked on his family’s farm before and after school. This instilled a strong work ethic that served him well as the provider for his own large family. He purchased a home in Northborough shortly after marriage and was a devoted family man. Raising his family in a comfortable, loving environment was of utmost importance to him. Dick’s greatest joy was having the entire family together every Sunday afternoon.

Dick was a longtime active parishioner to St. Rose of Lima Parish in Northborough. Along with Mary, he would spend countless hours volunteering at the church. He was a Lector for several years, and was active volunteering at the church youth camps, and with providing meal services to families after funerals. Dick also was a longtime member of the American Legion Post 234 and was an active member of St. Augustine Council #5724 of the Knights of Columbus where he served as both Grand Knight and Past Grand Knight. After retirement he and Mary regularly met with friends for coffee and conversation at McDonalds.

In addition to his beloved wife Mary, Dick is survived by his 6 children, Richard and his wife Linda of Shrewsbury, Stephen and his partner Nancy of Franklin, John and his wife Lynne of Sterling, Jeannine Ross and her husband Mel of Oxford, Laurene Nichols and her husband Bruce of West Boylston and Eileen MacQueen and her husband Cal of Boylston. He also leaves 16 grandchildren and 15 great-grandchildren, all whom he dearly loved, and many nieces and nephews. Dick was preceded in death by his brother, Archie Weir and sisters, Barbara Weir, Nina Swenson, Evelyn Hamilton and Marion Anderson.