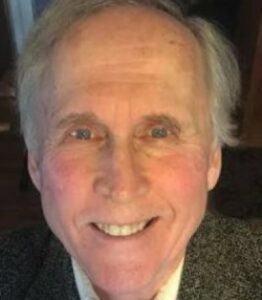 Grafton – The world has lost an important voice for all things wild.

World safari and tour leader, scientist, writer, sportsman and naturalist, Mark Mathew Blazis passed away suddenly on November 17, 2021, at home, with his adoring wife Helen by his side. No-vember: no leaves, no birds, and now no-Mark. But contrary to the dark and dreary days of a typical November, the 17th was sunny and warm. A perfect day for a perfectly adventurous man.

He would have been in his tree stand awaiting that perfect buck, while knowing his son Mathew was in another stand, sharing Mark’s passion for deer hunting. Both would have tested the wind direction and would have analyzed photos from their trail cameras. And then, suddenly, that monster buck would be in their cross-hairs…

Mark was a man of passions who strove for perfection in everything he did. He was a passionate fly fisherman. Catching giant brook trout and salmon in northern Labrador with his wife Helen was his idea of the perfect vacation.

Mark was passionate about the birds of Ecuador, having travelled annually there since 1988. He recently completed his 39th expedition to the lowland rainforests of Ecuador, working with the indigenous Kichwa tribe and American assistants trained by him to document plumages and field marks that differ from the most recently published field guides to the Birds of Ecuador.

Over the years, Mark Blazis brought 24 medical teams to help the Kichwa in the rainforest along the Napo River of Ecuador, often coming two or three times a year. For this, Mark and Helen received the American Red Cross Hometown Hero Award. “In recognition of your courage, kindness and unselfishness.”

He helped empower the Kichwa community, providing them, over the years, with optical equipment, educational supplies, financial assistance, as well as teaching them research skills and bringing some of them back to the United States to improve their English. He assisted rainforest natives, including Olger Licuy, to form their own bird-guiding company, Jungle Birders.

Upon hearing of the death of Mark, the Kichwa have mourned. “We lost a good man, a good leader and teacher. The rainforest weeps. We will miss Mark for his courage and kindness. Corazon del Tigre! Forever! Every single plant, bird, and animal we see in the Amazon will remind us of our friend Mark Blazis.”

In Massachusetts, Mark (Master Bander federal permit #22361) was the Director of the Auburn Birdbanding Research Station, studying neotropical migrants and Lyme disease, in partnership with Dr. Sam Telford at Tufts University, determining implications of Lyme disease carried by birds. Mark’s research team captures, analyzes, and releases on average 2,000 migratory songbirds per year in Massachusetts, though the scope of his research has also included Connecticut and Maine.

Mark’s crusade locally was to help ameliorate the differences between sportsmen and environmentalists by organizing them both to participate with him and his assistants, working shoulder to shoulder in birdbanding research at the Auburn Sportsman’s Club. His trained sportsmen now actually run the bluebird monitoring and banding program.

Mark has co-written and edited 10 local field guides to the fauna and flora of Massachusetts and produced one audio recording of the songbirds of Central Massachusetts.

He was chosen personally by the late Roger Tory Peterson as North America’s Nature Educator of the Year; and Mark has been feted for national awards in conservation education and research, being subsequently recognized and celebrated by the Massachusetts Audubon Society, and The Garden Club of America.

One of Mark’s specialties was the Okavango Delta, where he worked with his wife Helen to produce films for television on the dramatic interactions of lions and buffalo there. (He has led safaris to Africa since 1988). His most recent safaris were in Botswana and East Africa, filming the epic wildebeest migration crossing the Mara River from Tanzania into Kenya. His film crews consistently would see more game and film more species and dramatic events than any other safari group.

He led many safaris to Africa (Kenya, Tanzania, Botswana, Zimbabwe, Cameroon, South Africa, Namibia, and Madagascar), to the Amazon, to the Galapagos, to Machu Picchu, to India and Nepal for tigers, and to both the Arctic and Antarctica.

Having a dual major in Biology and English, much of Mark’s career was teaching Science in public schools or research writing at Clark University.

An award-winning member of the New England Outdoor Writers Association, the weekly columnist of the OUTDOORS of the Worcester Telegram & Gazette covered all aspects of conservation, fish, and wildlife, including management, reaching out to tens of thousands of people weekly. Mark was the recipient of the New England Outdoor Writers highest honor, the Richard Cronin Award.

Mark felt privileged to write for the Telegram & Gazette. His OUTDOORS column will always be remembered as a love song to wildlife and our wild land. Every OUTDOORS column in the T&G celebrated or defended our game and non-game, and served as a cheerleader-advocate to gain support for both. This column will live for his love of our natural world.

Mark Mathew Blazis was born on January 24, 1947 in Worcester, MA and lived in Grafton for all his married life. He was pre-deceased by his parents Francis Charles and Maggie Evangeline (Mathewson) Blazis of Worcester, his brother Bruce Blazis of Shrewsbury, and his nephew Todd Blazis of Barnstable. Mark leaves his wife of 47 adventurous and loving years, Helen (Rawinski), his daughter Jessica (Blazis) Reese, her husband Stephen, and their children Cameron and Connor of Sutton; his son Mathew Blazis, his wife Angela, their children Michael and Ava of Sutton; his brother Gary Blazis and wife Nancy of Marston’s Mills and their son Scott Blazis and his wife Christine of Barnstable; his great-niece Alison and great-nephew Gary; his great-nephew Nicholas Blazis of Barnstable; and his sister-in-law Helen Tasselar Blazis of Shrewsbury.

Mark was the best husband, father, grandpa, and brother one could ever hope to have. For his children, learning took place in the jungles of the Amazon, in the great museums of Europe, on the Serengeti Plains of Africa, and in the forests of Grafton. Everything became an opportunity to learn a new skill, truth, or insight.

Jessica writes, “Dad and I held hands as we snorkeled through Devil’s Crown, an eroded volcanic cone in the Galapagos. Our grip became tighter as we looked at the Hammerhead and White-tipped Sharks that were swimming directly below us! We smiled when sea lion pups swam up to us to play and occasionally nipped on our fins. Aš tave myliu Têti, amŽinai. (I love you Dad, forever.)”

Mathew writes, “We lost a true hero this week. He showed me love for the outdoors like no one else could. He would light up any room he walked into and be sure to talk to every single person in it. Let’s all remember the outstanding adventures we shared with my dad. Corazon del Tigre! I love you Buddy.”

Calling hours at the Roney Funeral Home are on Tuesday, November 23, from 4-7 pm. Visitors are requested to be vaccinated against Covid and to wear masks. A memorial service celebrating Mark’s life will be held later at the convenience of the family.