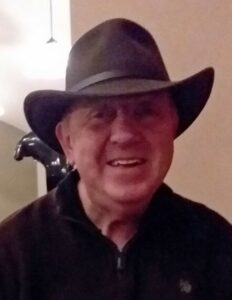 Marlborough – Paul J. Garnett, Sr. 70, of Marlborough, MA died Thursday November 18, 2021 at UMASS Memorial Medical Center after suffering a stroke on November 8th. He was the husband of Barbara A. (Kast) Garnett for the past 51 years.

He was born in Waltham, raised in Jamaica Plain, the son of the late Paul E. and Irene R. (Perron) Garnett and was a 1969 graduate of Dorchester High School.

Largely self taught, Paul was a man of many talents and skills. He was an acclaimed artist, sculptor, and photographer, worked with make-up to scare the neighborhood at Halloween, weather permitting, and on his kids’ theater projects when they were in school and later.

Through everything he painted. He researched every painting because he wanted it to “tell a story” to whoever viewed it. He loved the sea. His first drawings were of the U.S.S. Constitution in Charlestown, MA and his paintings have appeared in museums, private homes, the J. Russell Jinishian Gallery in Stonington, CT, the Camden Falls Gallery in Camden, ME, as well as the former Mystic Seaport Gallery: on book covers, cd covers, magazines around the world, and have been used in television and movie backgrounds. His paintings of the U.S.S. Constitution were popular, as were the many he did of his beloved Bounty – his “other woman”. The Marine Museum in Fall River has a 14-foot replica of the Bounty that he built.

He loved classical and film music, advising for a number of years the Cincinnati Pops Orchestra under the late Erich Kunzel when they were working on movie music albums.

Affiliated with the National Maritime Historical Society he is  a Signature Member of the American Society of Marine Artists.

A Mass of Christian Burial will be celebrated Saturday November 27 at 9 AM in Immaculate Conception Church, Prospect Street, Marlborough. Burial will be private. There are no calling hours. In lieu of flowers, donations may be made in Paul’s name to the National Maritime Historical Society, P.O. Box 68, Peekskill, NY 10566 (https://seahistory.org/).

Funeral arrangements are under the direction of the Collins Funeral Home,378 Lincoln Street, Marlborough, MA.

All are invited to sign Paul’s online guestbook at www.collinsfuneral.com.