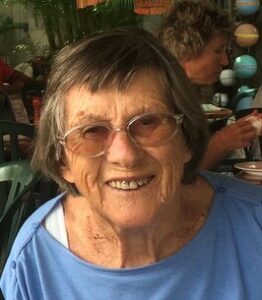 Berlin – Margaret VanBuskirk Bergen, affectionately known by Sally, died November 3, 2021 at home surrounded by her family, and attended by hospice.

Born in Wabash, Indiana, the daughter of Fred and Dorothy VanBuskirk, Sally lived in Berlin since 1948.

Margaret earned her undergraduate degree in applied sciences from Purdue University. She interrupted her studies during WW II to enlist in the Women’s Army Corps as a medical laboratory technician. She met her future husband, Jack, while serving in an army hospital in Indiana. Inspired by meeting Amelia Earhart while at Purdue, she took flying lessons and earned her pilot’s license for a small plane. Following her graduation, they married and moved to Berlin. Purchasing an unused lodge, they worked with an architect to design a unique home, using much material they recycled from the old structure.

Both Sally and Jack came from farming families, and her farming heritage stayed with her throughout her life. They planted a large vegetable garden, raised raspberries commercially, maintained a woodlot, ran a small farm stand. She was a skilled seamstress and avid knitter. She was active in the community and her church, First Parish of Berlin. Growing up, she was a lone Girl Scout, and believing that scouting helped empower girls, was (concurrently) troop leader for both a Brownie and a Cadette troop for 25 years. She served the town of Berlin in several capacities, including Town Treasurer for 20 years. She also ran a private medical lab for a general practitioner in Worcester for 20 years, and made house calls when necessary. Although she first saw the Atlantic ocean as a young adult, she grew to love salt water—so much so that she swam from early May to late October every year. She and Jack built a summer home in Mattapoisett, where they enjoyed sailing, swimming, and hosting large family dinners on the deck.

Hays Funeral Home, 56 Main Street, Northborough was honored to assist the Bergen Family during this time. To leave a condolence or to share a memory, please visit www.HaysFuneralHome.com.