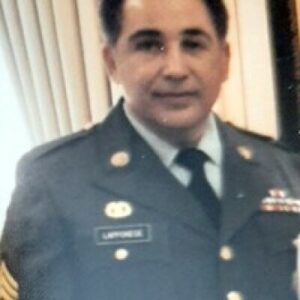 Lehigh Acres, Fla. – James N. Lapponese, 79, of Lehigh Acres, Fl, a 27-year, retired U.S. Army, Master Sergeant, passed away Thursday, November 18, 2021, with his loved ones gathered at his side, after a period of declining health.

Jim was born in Worcester, the son of Nicholas and Julia (Davolio) Lapponese. He grew up in Shrewsbury and graduated from Shrewsbury High School. Jim then embarked on a career of service in the U.S. Army as an enlisted soldier rising in the ranks to E-8/ Master Sergeant before retiring after 27 years of service.  The majority of his career was spent in the pentagon with tours in Korea and in NATO Headquarters in Belgium. The final years of his career were spent in the Office of the Secretary of Defense, Casper Weinberger during the Reagan Administration. After retirement, Jim spent over 20 years in Florida.

Jim was a member of St. Anne’s Church, The Italian American Veterans Club, and the Victor Quaranta Post American Legion. Trained as a chef, Jim found remarkable success and enjoyment in the kitchen. Several of his creations were enjoyed by Heads of States, fellow soldiers, family, friends, and neighbors. He loved to entertain and cook for everybody. He also enjoyed listening to country music and watching old westerns. He  truly believed that faith, family, and friends were the most important and had room in his heart for everyone he met. He was very generous with his love, time, and resources, and helped anyone he could.

Friends and relatives are invited to calling hours, Tuesday, November 30th from 4 pm to 7 pm in the MERCADANTE FUNERAL HOME & CHAPEL, 370 Plantation St. His funeral will be held Wednesday December 1st from the funeral home with a procession to St Anne’s Church, 130 Boston Turnpike Rd, in his native Shrewsbury where his Mass will be celebrated at 12:30 pm. Burial with full military honors will follow in Mt View Cemetery.

In lieu of flowers memorial contributions in his name can be made to Wounded Warrior Project, P.O. Box 758516, Topeka, Kansas 66675-8516. www.woundedwarriorproject.org/donate.