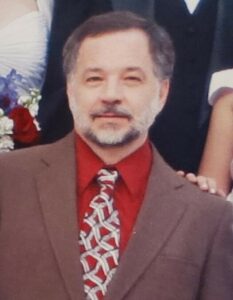 Marlborough – Robert (Bob) William Patterson, 60, of Marlborough, MA died on November 17, 2021 at UMass Memorial Marlborough Hospital from complications of Covid-19. Born on January 12, 1961 in Johnson City, NY, he was the son of Frank Zellers Patterson and the late Dorothy Jean Major.

Bob developed a love for sports playing pond hockey with his brothers and running track in high school.  His later sports interests include golf, fencing, skiing, and ice hockey.

First drawn to music by crash cymbals, Bob later played drums, cello, guitar, and bass guitar. He played in a garage band with his brothers and school friends.  Later he continued the garage band tradition with co-workers and friends.

Bob earned a BS in Electrical Engineering from Rensselaer Polytechnic Institute where he joined Lambda Chi Alpha fraternity.  After graduation he was employed by the Raytheon Corp for 25 years.  Later, he was employed by Jacobs Systems and Oasis Systems.

While working at Raytheon, his boss (a former Air Force pilot) brought him on excursions in his plane. Bob caught the flying bug.  He earned his private pilot license and later an instrument rating.  He bought a small plane of his own and used it to travel with his family. He often flew locally for the simple joy of flying.

Bob joined the Marlborough EAA chapter and later the Stow chapter.  While in Marlborough, he took numerous children and some parents for an introductory flight in his airplane with the EAA’s Young Eagle program.

He started a small business with his wife offering instruction in the sport of fencing.  Later the business concentrated on custom electronics design. He retired in February from his day job. Since retiring, he divided his time between electronics, golf, hockey, and flying.

A private memorial will be planned.

In lieu of flowers, donations can be sent to AOPA Air Safety Institute www.aopafoundation.org/donate or EAA Young Eagles Program http://www.eaa20.org/donate.html.