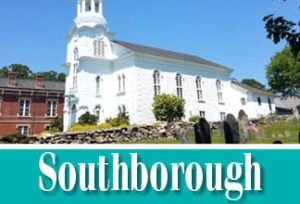 SOUTHBOROUGH – The average residential tax bill in Southborough will rise by $523, equivalent to  4.89 percent, following a vote by the Select Board last month.

Principal Assessor Paul Cibelli walked board members through a presentation Nov. 16 recommending a single tax rate for the 2022 fiscal year of $16.28 per $1,000 in assessed property value. That rate is a 0.43 percent increase over last year’s amount, $16.21.

It does not include Southborough’s Community Preservation Act surcharge—averaging $96.05 for a single-family home.

Commercial, industrial and personal property owners will see an average $279 increase on their bills, translating to a 0.55 percent increase.

Cibelli noted that the tax increase was partially due to new growth being down by about 20 percent. Other factors for the valuation increase include a rising residential market and declining commercial and industrial markets, he said.

The assessor explained that, although Southborough’s CIP (commercial, industrial and personal property) comprises 5.63 percent of the town’s taxable parcels, it generates 18.81 percent of the total tax revenue.

He pointed out that local businesses are typically also contributors to town events, athletics and recreation programs.

The Board of Assessors recommended keeping a single tax rate, with Cibelli noting that most communities with split rates are located along route 128 and in southeastern Massachusetts.

Select Board member Sam Stivers, acknowledging that he didn’t have support for his stance, said he thought federal money from the American Rescue Plan Act should be used to decrease the impact on taxpayers. That plan would reduce the residents’ tax bill increase to around 4 percent.

“The optics of a tax increase is not very attractive,” Stivers said.

He also referred to a study that he said showed communities with split tax rates don’t necessarily discourage businesses from locating within their boundaries. Stivers said he would like to keep the idea of a split rate “on the table” for the future.

Select Board member Andrew Dennington said that, although he is interested in Stivers’ data, it is a “uniquely bad time” to consider whether to change to a split rate.

“To change a longstanding policy without warning wouldn’t be the right approach,” he said.

Chair Lisa Braccio noted that the communities with split rates are typically larger, like Framingham. They also often offer sewer, she said, something Southborough does not.

In addition, she said, businesses both large and small are all hurting still as a result of the COVID-19 pandemic.

No members of the public elected to participate in the discussion, so the Select Board voted unanimously for the $16.28 rate, although Stivers said he did so “reluctantly.”