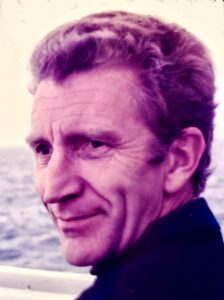 Northampton – Born in Pretoria, South Africa, Peter grew up a country boy on farms in the Transvaal (now Gauteng) and Swaziland (now eSwatini). He could milk cows and fence pasture but dreamed of flying and airplanes. Before completing high school in 1946, he had applied for and won a scholarship to study Aeronautical Engineering at the Handley Page Aircraft Company and the Northampton Polytechnic Institute in London.

Arriving in war-ravaged England at age seventeen affected him profoundly, as did the opportunity to see racist South Africa beyond the veil of state-controlled media. He returned to South Africa in 1953, and finding that the fledgling aircraft industry had not developed as he had hoped, he turned to the turbine and valve industries, which meshed well with his skills as a mechanical engineer.

In 1960 he married Jillian Barker. Eighteen years later, while working for Smith Valve Corporation in Johannesburg, he was offered a position at its headquarters in Westborough, Massachusetts. Peter and Jillian arrived in the United States in January 1979 with their four children, looking forward to new opportunities and possibilities for growth. At the age of 60, Peter courageously accepted an offer by a South African friend in Canada to take over the American branch of EMSEAL Joint Systems Ltd. Together with his son Lester, they expanded the range of its expansion joint systems used in construction, and after 32 years of innovation, the company enjoys a worldwide reputation.

When memory loss prevented Peter from continuing as an application engineer, assembling samples for one of EMSEAL’s more complex products in his home workshop provided purposeful work into his late eighties. Peter passed on many of his skills and curiosity about how things work to his children.  Projects were always underway in his workshop, and he shared adventures in scouting, camping, and sailing.  He also delighted in his children and grandchildren’s creative pursuits in art and music.

A devoted husband to Jillian for 61 years, father to Kenton (Larissa), Lester (Josephine), Julia, Mark (Karen Thomas); grandfather to Jordan, Harrison, Benedict, Lila, and Breanna, Peter passed on November 19, 2021, in the memory unit at Rockridge in Northampton. The family extends their gratitude to the facility’s extraordinarily caring staff who attended Peter during his last days. Peter was predeceased by his parents, Frank Thornton Hensley and Kathleen Mary (Smith) Hensley of Mbabane, eSwatini. He is also survived by his brother, Malcolm, in East London, South Africa.

Peter was laid to rest at Wildwood Cemetery in Amherst, MA, in a private burial ceremony.

A memorial gathering to celebrate Peter’s life will be held in the spring of 2022 in Westborough – all are welcome.

Donations may be made to the Center for New Americans, which provides education and resources for immigrants and refugees: https://cnam.org/