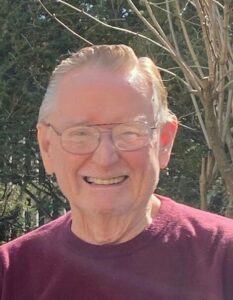 Southborough – Sherman H. Ball, 87, of Southborough died Monday, November 22, 2021 at Whitney Place in Westborough after a period of declining health.

Born in Des Moines, Iowa he was the son of the late R. Sherman and Ethel C. (Smith) Ball and the husband of the late Adrienne (Pessini) Ball.

Mr. Ball joined the United States Navy serving during the Korean Conflict where he received the National Defense Service Medal. After leaving the Navy, he was employed as a project manager on several Department of Defense Contracts and continued his education earning a B.S. from Boston College and a M.B.A. from Babson College.

Sherman is survived by his daughter A. Frances (Ball) Oyama of Clinton and his cousin Eve R. Bennett of Minnesota. He was also the grandfather of the late Emiko Oyama.

Funeral arrangements are under the direction of the Slattery Funeral Home, Inc., 40 Pleasant St., Marlborough, MA 01752 and will be private.

Donations may be made in his memory to DAV at https://www.dav.org/ways-to-give/.

Southborough residents weigh in on proposed noise bylaw through survey