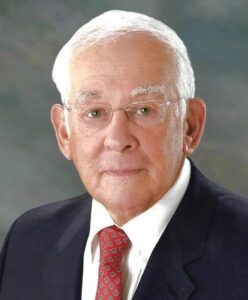 Shrewsbury – Charles W. “Dino” Patronas passed away peacefully on November 26, 2021 in his home surrounded by his loving family.

A true Renaissance man, Dino lived his life selflessly and humbly, lending his ear and his hand to anyone in need. Soft spoken and direct, supportive and stern, you could always count on him for thoughtful advice and unwavering support. He believed everyone was deserving of the opportunity to improve, advance and succeed.

Born in Worcester on August 25, 1930 to Greek immigrants Mary and William Patronas, Dino worked at his family’s Worcester restaurant, The Wholesome where he learned at a very young age the importance of family, hard work and lasting friendships. Shortly after graduating from The High School of Commerce in 1949, his father passed and Dino assumed the responsibility of family patriarch. This was a role he proudly and so dominantly maintained throughout the entirety of his life.

In 1954, Dino enlisted in the United States Army where he was stationed in Germany and assigned to the 555 Engineer Group. While in Europe, he was fortunate enough to immerse himself in the Greek culture, where his love and pride for his Spartan heritage only deepened. The highlight of his excursion was celebrating the most Holy Easter with King Paul of Greece.

Several years after returning from Germany, Dino met and married his loving wife, Alexandra with whom he had three daughters that he affectionately referred to as “Charlie’s Angels.” He was appointed Executive Secretary to Governor John A. Volpe of Massachusetts, then held the position of Deputy Commissioner of Insurance. After the Governor’s term expired, he returned to his roots in Worcester, where he served as Deputy Assistant to Register of Probate and Family Court for over 33 years, retiring at the age of 79. During this time, he was recognized with numerous prestigious awards including The Saint Thomas More Red Mass Award.

Measured against all of his life’s successes, the roles he was most proud of were those of husband, father and grandfather. Each milestone and achievement by his three daughters and seven grandchildren were a constant source of pride and joy. A lifelong sports aficionado, Dino enjoyed playing and coaching basketball as a young adult, later imparting his extensive knowledge of all sports to his children and grandchildren. Every interaction with his family was an opportunity to instill in them the importance of personal accountability, loyalty and love. He reminded them all repeatedly of his unconditional love with his affectionate response of “I love you more.”

Dino is survived by his cherished wife of 56 years, Alexandra (Pialtos) Patronas and his devoted children, Maria Munro, Elena Kvaracein and her husband Jeffrey, Dina Lanza and her husband Jonathan; his beloved grandchildren Ava and Chase Munro, Nina and Laila Kvaracein and Jonathan Jr., Mia and Francesca Lanza; his sister Helen Tasselar Blazis and several nieces. He was predeceased by his parents, his sister Sally Kouvaros, his brother Eleas Patronas and brother-in-law Dr. James Pialtos.

Calling hours will be held on Friday, December 3rd from 9:30 a.m. to 11:00 a.m. at Saint Spyridon Greek Orthodox Cathedral, Worcester, Massachusetts. A funeral service to celebrate his life will begin at 11:00 a.m. Burial will follow at Hope Cemetery.

In lieu of flowers, contributions may be made to Saint Spyridon Greek Orthodox Cathedral, 102 Russell Street, Worcester, Massachusetts 01609.

Funeral arrangements are under the direction of Athy Memorial Home of Worcester.