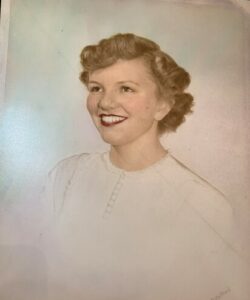 Throughout her life Dorothy held many roles; mother, grandmother, great-grandmother, wife, sister, daughter and friend. There lies the difficulty in expressing how much she meant and what she meant to each person. She will always be remembered for the love she showed, the giving nature of her heart, the feeling of warmth and home that she exuded. In contrast, her sharp wit and “Dot” like comments often had many laughing and cringing at the same time, these will also be missed.

Dorothy battled cancer for the last year of her life; upon receiving the news of her cancer diagnosis her response to her daughter-in-law Tiffany was “oh shit, let’s go get ice cream”. Dorothy was a mix of contrasts, a deeply loving and warm person often putting the needs of her children and grandchildren above her own; hiding her pain to keep the joy and warmth in the room for others. Finding her voice throughout her life to express what she wanted and needed was very important to her, especially in the end. Though she struggled with this aspect, she was always the best cheerleader for those around her.

In her life Dorothy’s main focus was her family, she was a stay-at-home mother and wife for the majority of her life. After marrying her high school sweetheart, she raised 7 children, survived the untimely death of her first husband Paul Mallard, and continued to raise her Mallard clan and always put her children first. After marrying her second husband Roland, Dorothy continued in her role of wife and caretaker. She focused on her grandchildren and became the quintessential “Nana”. She will always be remembered for her hugs and her smooches to the cheek. Her bedtime words “good night, sleep tight, don’t let the bedbugs bite” will forever conjure feelings of warmth and being tucked in at Nana’s house. Dorothy radiated the feelings of “home”, she was “home” for so many. Her family believes that she is now laughing, with rosy cheeks, loving on those friends and family that preceded her, and no doubt chasing every leaf on her heavenly lawn, and planting the most beautiful flowers.

Dorothy is survived by her husband Roland of nearly 37 years, her brother Leo and her sister Jean whom she loved to say was just “oh so wonderful”. She is also survived by her 7 children from her marriage to Paul Mallard: Beverly Scott of Berlin, MA and her 3 children; Richard Mallard of Austin, TX and his two daughters; Paul Mallard of Marlborough, MA, his wife Tiffany Mallard and their 4 children; Kathy Ruest of Hudson, NH and her two daughters; Pat McNeil of Marlborough, MA and her husband Bruce McNeil and their 3 children; Mary Shirley of Rio Rancho, NM and her 4 children; and Leo Mallard of Buford, GA, his wife Lori and their son. She is also survived by 13 great-grandchildren and numerous nieces and nephews.

In the end of her life Dorothy received much care and attention from people outside of her family. The family of Dorothy would like to especially thank these caring individuals including but not limited to the Brookhaven staff, particularly Kim and Patricia. Thank you to the extended Allard and Mallard family for pulling together in Dorothy’s time of need, in the end she expressed her gratitude to her family for coming to her aid.

Relatives and friends are invited to a period of visitation from 4-7pm on Tuesday, December 7, 2021 at TIGHE HAMILTON REGIONAL FUNERAL HOME, 50 Central St., Hudson, MA. A Celebration of her life will be held at 10 am on Wednesday, December 8, 2021 in the funeral home; followed by a procession to Forest Vale Cemetery in Hudson for Committal Services.