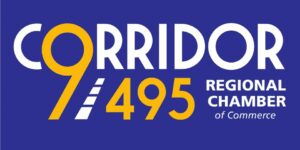 REGION – The Corridor 9/495 Regional Chamber of Commerce announced the winners of its year-end awards earlier this month, recognizing businesses and individual contributors to the area business community.

The awards had been presented earlier this year before the chamber announced the winners through social media beginning on Dec. 1.

Ben Colonero won the Chamber’s Lifetime Achievement Award. He’s the former Executive Director and Community Liaison for the Willows at Westborough and has remained closely involved with the Chamber itself, serving on its board while also supporting the Applefest 5k race in Northborough and the Chamber’s golf tournament fundraiser.

“This award recognizes his legacy of leadership and remarkable contributions to the Chamber,” chamber President and CEO Karen Chapman wrote in a statement announcing Colonero’s honor.

Vincent Servello III won the honor of Outstanding Young Professional of the Year roughly seven years after he opened his business, Servello CPA, in Westborough. Servello had previously worked in accounting firms both big and small in New York and Boston. A Westborough High School graduate, he’s been involved in the community in Westborough, working with the Chamber and sponsoring various community events and programs.

Welsh is the Board President of Dress for Success Worcester, which helps women learn job skills for job readiness. She’s also been involved with the Chamber’s Business Forward Females steering committee, helping run programming associated with that committee’s mission.

“This award celebrates an exceptional woman in business whose leadership inspires other females to achieve their full potential,” Chapman wrote in the chamber’s statement honoring Welsh.

Bagdon was recognized as this year’s Chamber Champion. The longtime publisher of the Community Advocate, Bagdon has also been involved with the chamber for 35 years, aiding in various initiatives and promoting local businesses through efforts like the Community Advocate’s “Buy, Believe, Local” campaigns.

Meagan Jackson’s M. Jackson Accounting and Bookkeeping, meanwhile, was noted as the Small Business of the Year for 2021.

“What has been truly remarkable is the personal growth and success story of this self-proclaimed reluctant networker,” Chapman noted.

Learn more about the Corridor 9/495 Regional Chamber of Commerce by visiting their website https://www.corridornine.org. See more information on all of this year’s award winners by visiting the Chamber’s Facebook page at www.facebook.com/CorridorNineChamber.