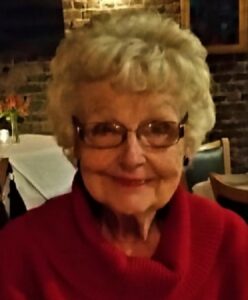 Mountain Brook, Ala. – Marian C. Webber, age 94, passed away peacefully December 25, 2021 at St. Vincent’s Hospital in Birmingham Ala. Marian was born on November 26, 1927 in Philadelphia, the only child of John and Mildred Cosma.

Marian grew up mainly in Dayton, Ohio, where her father (a rollercoaster engineer), had settled down after becoming an amusement park manager. She had also lived in Cleveland, Chicago, and Shrewsbury MA.

She graduated from Roosevelt High School in Dayton in 1945 and soon attended Ohio State University, becoming a member of the Delta Zeta sorority and majoring in history with a minor in English. After her graduation in 1950, Marian was employed in a research lab at Wright-Patterson AFB during the Korean War. It was there she met her future husband, Roy P. Webber II. They were married, after the conflict ended, on August 28, 1953.

Marian lived in a number of paper mill towns and cities following her wedding to Roy. They first relocated to Charleston S.C., where she was a seventh-grade school teacher. Later in the 1950s they moved to Piedmont and Westernport, W.V., and then Luke, Md. for about seven years. During the 1960s and 1970s she lived in Newton Centre, MA, St. Helens Ore., Chillicothe Ohio, and Escanaba Mich. While living in Massachusetts, she appeared on the original version of the game show Jeopardy! Marian returned to Dayton two times before making a final move to Mountain Brook, Ala. in 1976, living there in the same house for over 45 years.

Her hobbies included league bowling (she holds the family record high-game score), collecting colored glass vases and playing card games, especially bridge and cribbage. Marian and Roy were the Escanaba bridge club couples champions in 1972, and she also participated in a weekly bridge game with lady friends down in Alabama. Learning how to play cribbage in the 1960s from Roy’s father, she enjoyed this board game nearly as much as bridge, especially in friendly competitions with her sons.

Marian was well-known for her love of words; she was a bona fide bookworm who read at least 300 titles a year, mainly murder-mystery novels. She also enjoyed doing (very successfully) the New York Times Sunday Crossword puzzle and Acrostic. During the 1980s and 1990s Marian was active in the Birmingham League of Women Voters, first becoming Secretary and then later President until she retired from that organization.

Cooking and baking were also great passions of hers. Marian was an excellent pie-maker, especially her blueberry and apple pies (Roy’s hunting buddies were delighted when he brought an apple pie to camp). They took many international trips together, visiting such faraway places as Spain, Greece, China, Africa and New Zealand. Even after Roy passed away in 2006, Marian and her daughter went on a number of river and coastal cruises aboard smaller ships, primarily in Europe.

Family was very important to Marian. She loved having her children and then later her grandchildren come to the Birmingham home and visit. Always the gracious host, she would frequently hold dinner parties for friends, and was highly complimented about the table she set. Roy often brought home venison, duck and wild turkey meat to make these repasts extremely memorable for both family and guests, most often followed by a dessert course that featured one of her delicious pies.

Marian is survived by her daughter Susan of Mountain Brook; sons Roy III (Debra) of Escanaba and John (Tracey) of Vero Beach Fla.; grandchildren Katharine Webber, Anne Webber and Emily Cosma. She was preceded in death by her parents, husband, and brother-in-law Richard Webber. Arrangements are being coordinated through the New JMW

Funeral Home; a small graveside service and burial alongside her parents will take place sometime later in 2022 at the Dayton Memorial Park.