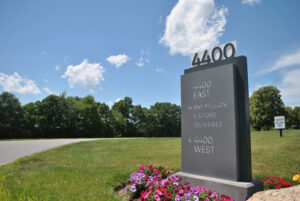 WESTBOROUGH – Amazon expanded its presence in Westborough earlier this month by buying a sprawling property at 4400 Computer Drive, off Route 9.

This development comes after multiple meetings between the Westborough Planning Board and Atlantic Management, which filed plans for a 221,256-square-foot, single story e-commerce facility at 4400 Computer Drive earlier this year.

The Planning Board approved Atlantic’s site plans on July 6, moving the project along after discussions about traffic impacts and noise, among other things.

The new facility will include a 12-foot sound wall to prevent the impact of on-site noise to abutters.

The Community Advocate reported back in July that the applicant will need to “revisit” its sound wall after 18 months of operation to ensure that it is meeting set goals.

The applicant will also be required to conduct a post-occupancy traffic study to evaluate the impact of this development on area roads.

The Planning Board’s approval is further contingent on the applicant spending $30,000 on a consultant to study and identify possible future infrastructure projects in the area around 4400 Computer Drive.

Lastly, the applicant will grant the town an easement and $20,000 to expand the existing Charm Bracelet trail network through the 4400 Computer Drive property.

“That Charm Bracelet is an important project to the town, decades in the making,” Planning Board Chair Mark Silverberg said during a meeting on June 15, prior to the Planning Board’s approval of Atlantic’s site plan application.

Facility would neighbor nearby Amazon operations

Amazon already operates a sorting center in Northborough as well as a newly opened robotics center at the old AstraZeneca facility at 50 Otis Street in Westborough.

Development in this part of Westborough would further mark the latest change to a busy corner of the town’s industrial region.

The BJs Wholesale Club headquarters off Route 9 is visible from the 4400 Computer Drive parking lot. BJs is anticipating a move to Marlborough, though, therefore planning to vacate its current space.

Farther back in the Westborough Office Park, Mass General Brigham is looking to build a new ambulatory care clinic next to the recently completed Olympus corporate office which prominently overlooks Route 9.

Northborough Planning Board heads to trial in Gutierrez appeal