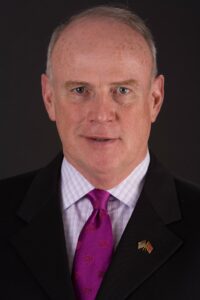 Southborough – Bernard F. Bradstreet, 76, of Southborough,  passed away at home on Sunday, January 2, 2022 from complications of Multiple Myeloma. He was the beloved husband of Carol (McKenna) Bradstreet for 53 years.

Bern was raised in Ashland, attended Marian HS and graduated from Harvard College and Harvard Business School. Upon college graduation, he served as a Marine Corps fighter pilot and continued to fly in the Reserves while in business school and into his civilian career. He was forever proud to be a Marine and serve his country.

He was an executive and entrepreneur in banking and technology starting with First Chicago, then as Treasurer of Prime Computer, President & CEO of Kurzweil AI, SVP of BrookTrout Software, co-founder of Sonexis, Envox, ConstructSecure and BCB Consulting.

Bern was an unrelenting optimist, loyal supporter, advocate and counselor to his family and friends. He was an avid golfer, squash and tennis player, traveler, skier, planning aficionado and toastmaker. But, Bern’s number one priority was always his wife and marriage. His devotion to Carol was legendary, always focusing on ways to make her happy. This love was followed closely by his passion for his children and watching them on sports fields, courts, mats, stages – any venue where he could show his wild support, continually and unfailingly fulfilling his role as best father ever in the eyes of his children.

In addition to his wife he is survived by his children, Joshua and his wife, Priscilla; Barret and his wife, Barbara; and Kenley and her husband, Shawn; as well as 6 grandchildren, Quincy (8), Everett (7), Alden (6), Beckett (5), Harlow (3), and Alexandra (2); his siblings, F. Peter Bradstreet; Frederick E. Bradstreet and Kathryn Davis, and many nieces, nephews, and cousins. He was preceded in death by his parents, Franklin H. and Kathryn (Carragher) Bradstreet.

A funeral Mass will be held Saturday, January 8, at 11 am at St Matthew Church, 26 Highland Street, Southborough. Burial will be private.

Memorial contributions may be sent in his memory to the Cystic Fibrosis Foundation, 220 North Main St, Ste.104, Natick, MA 01760  https://www.cff.org/chapters/massachusetts-rhode-island-chapter.

To leave words of condolence to the family, please visit www.bernbradstreet.com.