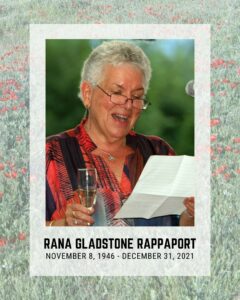 She is survived by her husband Jonathan Rappaport, children Maya Rapaport, Netta Rappaport, and Gabriel Santner, and grandson Adiel Santner. She is also survived by her siblings Samuel, Ora, and Avi Gladstone along with their spouses and many beloved nieces, nephews, cousins, and friends.

Rana was born November 8, 1946 in Brooklyn, NY, to Saul and Shirley (Kivowitz) Gladstone, and had a childhood filled with family, music, nature, and Jewish traditions. As a young woman, she played cello and sang in choirs, explored art museums, and spent formative summers with her family in the Catskills.

Soon after graduating Brooklyn College in 1969, Rana immigrated to Israel, where she lived for 18 years speaking fluent Hebrew. She considered herself an Israeli for the rest of her life and remained devoted to her adopted family in Israel.

In 1988, Rana moved back to the United States, where she met Jonathan Rappaport. The two were married on 8/8/88 after a three-month courtship, and they spent the next 33 years together. Their marriage was built upon deep mutual respect, shared love of arts, nature, and travel, and a boundless love for one another and their children. Theirs was an example to many of what a loving relationship should be.

Rana was a formidable opponent in Scrabble, an unmatched conversationalist, an avid reader, and a lifelong learner. She could name the title and composer of every classical piece she heard, learned new languages with ease, and was unabashedly honest and true to herself. Her unrestrained laugh and love will be missed.

In lieu of flowers, donations may be made in Rana’s honor to the Mira Coalition (https://www.miracoalition.org/), the Society for the Protection of Nature in Israel (https://natureisrael.org/), or the Worcester County Foodbank (https://foodbank.org/).