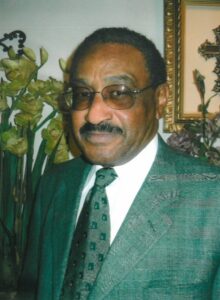 John was born in Newport, Rhode Island to the late John and Charlotte (Booker) Williams. Affectionately, known as Jackie while growing up in Newport, in 1954, he graduated from Rogers High School and continued his studies at the Wentworth Institute in Boston. Shortly thereafter, he secured a job with the Raytheon Corporation, where he was employed for a career spanning 40-years, in various positions. He retired as a Section Manager, working in printed wiring and CAD design. He learned the values of work and generosity early in his life.

Faith was one of the core values of John’s character. He was an active member of St. Paul’s AME Church in Cambridge, Massachusetts, where he served in many roles, including on the Trustee Board for many years.

Jackie had many interests, which included golfing with friends from work and participating in a league. He had a strong interest in music, in particular jazz, influenced by the Newport Jazz Festival, which he attended regularly. He dabbled at playing the saxophone along with his brother-in-law Ted (Ricketts). He also experimented with photography and produced creative pictures. Jackie’s interest in motor vehicles was varied and included motorcycles, sport roadsters, trucks and sedans, which he kept in immaculate condition. Jackie took great pride in his appearance. Enjoying automobiles and dressing well are traits he shared with his sons. Above all, he enjoyed collecting and reading the Bible.

John is survived by his wife of 63-years, Jane Davis Williams, their twin sons; John A. Williams and James E. Williams, both of Marlborough, MA; his sisters Lily Carter of Middletown, RI (the late Robert Carter) and Joan Ricketts of Waltham, MA (the late Theodore Ricketts); his nieces and nephews, Donna Dawson (Michael) of Acton, MA, Theodore Ricketts (Vivian) of Acton, MA, and Robert Ricketts of Copenhagen, Denmark, Charlene Traynum (Todd), Wakefield, RI; cousins June and Janice Cooper, both of Jamaica Plain, MA; and a host of great nieces and nephews.

Funeral services will be private.

Memorial donations may be made to a charity of your choice in John’s name or to the following charities below which he supported: