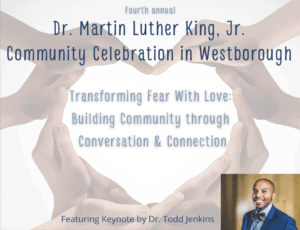 WESTBOROUGH – Conversation is key in transforming hate and fear into love and acceptance. But facilitating conversations on race within a community presents unique challenges.

“We’re coming off the heels of the racist graffiti at WHS,” Executive Director Kelley Petralia said in a recent interview with the Community Advocate. “That’s what shows us this is really needed.”

The school held a Unity Walk last week as part of that effort.

Westborough Connects was founded in 2017 as a local grassroots organization to create a more connected and kind community.

It has held its annual Dr. Martin Luther King, Jr. Community Celebration since 2018.

Westborough Connects is working in tandem with Central MA Connections in Faith, the Westborough Interfaith Association and the Westborough Public Schools to organize this event. Its theme is “Transforming Fear With Love: Constructing Community through Conversation and Connection.”

“The goal of the event is to honor Dr. King’s legacy and what inspires us, but also how to move that into action,” said Petralia. “What can we as a community do to transform fear into love?”

The event has been planned with inclusivity in mind, with  English closed captioning, as well as live Spanish interpretation. Petralia encourages youth to attend.

Westborough is not the only area community to contend with incidents of hateful graffiti and other issues.

Just this past week, school officials in Shrewsbury said they were responding to a similar incident at Shrewsbury High School (SHS).

That was the second such case at SHS in a matter of months after officials noted hateful vandalism in November.

Petralia said she believes COVID-19 has exacerbated aggressive discourse nationwide by adding a degree of separation between community members.

“With COVID and keeping us away from others and having to rely more on online channels, it has created a bit of distance to have those deeper understandings and perspectives,” she said.

Even with challenges in the digital space, Petralia believes it is imperative to continue to have these conversations with youth and adults alike.

“What we’re trying to do very deliberately and slowly is to keep plugging away and to keep having those conversations,” she said. “This is an opportunity for the community at large to come together and transform some of that fear we see.”

In the past year, Westborough Connects has provided a monthly racial justice toolkit. It has also worked with the Westborough Public Schools to provide programs on how families can discuss diversity at home.

Event will include breakout discussions, StoryWalk

Contest winners will be selected in advance of the event. Winners will then have an opportunity to present their projects at the event.

Attendees ages 12 and older will have a chance to participate in small group facilitated conversations hosted by Central MA Connections in Faith.

Children and their parents or caregivers, likewise, can participate in a live, in-person presentation of the story “My Name is Sangoel.”

That will take place after the main event, at 1 p.m., on the grounds of Westborough High School via a StoryWalk® display and a presentation by community member Nuray Wallace.

This main Martin Luther King Jr. Day event will be held virtually on Zoom on Monday from 9 a.m to 11:15 a.m. It will feature keynote speaker Dr. Todd Jenkins. Registration is required.