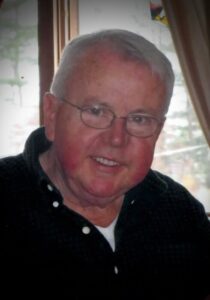 Marlborough – Frank P. Lahey, 78, of Marlborough died Friday January 14, 2022, at The Branches of Marlboro after a battle with Alzheimer’s and Parkinson’s. While the diseases may have defined the way he died they did not define the way he lived.

Frank was born in Cambridge, MA and was the son of the late Francis T. and Mary A. (Kelly) Lahey and the husband of Susan (Carr) Lahey for 53 years.

As a boy he moved to Marathon Street in Arlington, MA where at age 11 he met his lifelong friend Bill Matarese. Together along with Paul Moroney, Tom Battell, Joe Brodbine, and Jimmy O’Neil, they would form an unbreakable bond as the gang of 6. As life grew them apart with their roles in the service, careers and children, Frank served as the self-appointed glue to keep everyone together. He would reach out a couple of times a year to schedule a dinner for everyone to catch up. To this day, over 60 years later, the friendships endure through successes and failures, love and loss, children, and grandchildren.

Frank’s love of cars was one constant throughout his life. From his early days pushing a non-motorized go cart, with Bill Matarese, up and down the driveway on Marathon Street, to his 57’ Chevy, Frank loved cars, especially clean ones. He was fanatical about keeping his car immaculate.

Despite his best efforts to hide his car on their wedding day, his buddies were able to find it and “decorate” it. He was late to leave for his honeymoon because he had to stop and wash the car before setting off for the trip.

Frank would drop Joe off at the bottom of his street to avoid driving down the dirt road Joe lived on. Frank would even grill his children about wiping their feet off before getting in the car when leaving the beach on Cape Cod.

As much as he loved to clean his cars, Frank also loved to drive them, and drive them fast. Traffic was light in the early days of Route 2, Frank would routinely meet up with the guys at Big Burger, the space now occupied by the Alewife T station, to watch and participate in the races. No matter where the race began, it always ended at the same place, the Ho-Jo’s at Fresh Pond where Frank’s creature of habit personality was on full display with his standard order of a hot dog, fries, and a coffee ice cream soda.

Throughout his life Frank saw a lot of the country and the world. From the icebergs of Alaska, through the islands of the Caribbean, to the pubs of Dublin, Frank enjoyed meeting people wherever he was. In his younger years, he loved the hustle and bustle of the beaches on Cape Cod but traded it in later in life for the tranquility of a log cabin in Penobscot Maine, where he would often sit on the porch and watch the boats and the birds go by on the pond.

Besides his wife, Frank is survived by his daughter, Kathy Mosher and her husband John of Hopkinton, his son Bill and his wife Emilie of Duxbury, and his four granddaughters, Elizabeth, Laura, Maryn, and Margaret.

In lieu of flowers we ask you make a donation in Frank’s name to the Alzheimer’s Association (act.alz.org) or the Parkinson’s Association (www.apdaparkinson.org)