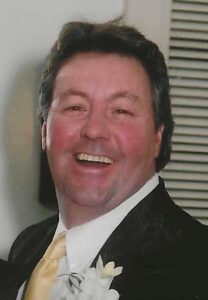 Marlborough – Edward T. Condon Jr passed away on January 17, 2022 following a short illness. Born in Texas while his parents lived on a military base there, Ed was raised and spent most of his life in Marlborough, a town he loved, and where he had a long successful career in construction.

In 2006, Ed met the love of his life, Eliana. Together they built a loving home with her sons Thiago and Pablo (Elora), and now five grandchildren, Samuel, Isaac, Chloe, Leah and Daniel.  Family was the center of Ed’s universe and his greatest source of pride.

Predeceased by his father, Edward T. Condon, Ed is also survived by his mother Laurine (Turner) Condon, brothers Bruce (Kay) and Cliff (Zjef), a large extended family, and many friends who will miss him immeasurably.

While Ed served in the US Army as a young man, his warmth and charm led the people he met — whether hitchhiking through Germany or talking to bunkmates – to share with him the stories of their lives and local history. When he returned home to Marlborough, he said the stories that people from around the world shared with him were his greatest education.

That warmth and charm continued throughout his life. Ed was known for his quick laugh and big heart, always going out of his way to help others. His contagious smile brightened every room. One of the “good guys,” Ed is gone far too soon and will be missed by all that knew him.

In lieu of flowers, Ed would wish us each to take a day to spend with our own families, building a treehouse for a beloved grandchild, or simply enjoying each other and having a laugh together over old stories.

All are invited to sign Ed’s online guestbook at www.collinsfuneral.com.