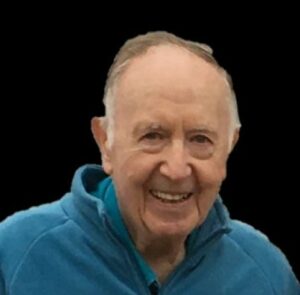 Roger is survived by his daughters Karen, Linda (Matt), and Nancy (Jeff), his grandsons James and Danny Breen, his brothers Edward, Charles, and Adrian, his sister Linda, and several nieces, nephews, and in-laws. Roger was predeceased by his wife Carol, his brother Warren and his sister Marjorie.

Roger was a dedicated Town of Hudson public servant for over three decades. He worked for the Hudson Light & Power Department for 29 years and was recognized as Hudson’s first civil service call firefighter, a role he continued for 33 years. He was well known for venturing out in the worst weather to restore electrical power to area residents, and for his role in numerous firefighting and rescue operations. State and local officials cited Roger’s achievements at the time of his retirement.

Roger was a natural Mr. Fix-It, never happier than after convincing a seemingly defunct machine to work well again. He was a man of action rather than words, and his preferred language was hard work. Throughout his life, he demonstrated his commitment to and caring for others in his public service, by diving into projects at the homes of family members, by assisting neighbors after storms, and by sharing produce from his home vegetable garden. In retirement he enjoyed traveling with his wife and gathering with his children and grandchildren.

A socially-distanced service will be held graveside at Forestvale Cemetery on Broad Street in Hudson, Massachusetts on Monday, January 24th at 11:00 a.m.

In lieu of flowers, Roger’s family requests donations be made in his memory to the Hudson Firefighters Relief Association, 296 Cox Street, Hudson MA 01749.