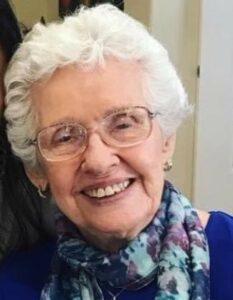 She was the daughter of the late Daniel and Edna (Dewar) Matheson and wife of the late John H. Guiou, who died in 2021.

Cathie’s parents emigrated to Watertown, Massachusetts from Prince Edward Island, Canada, to start a new life as a first generation family in America of four children, Bea, Eileen, Cathie, and their adored younger brother Donald ‘Bud’. Cathie described early life as “a most wonderful childhood”, and recalled listening to old time radio shows like Little Orphan Annie and The Shadow, sharing late night snacks while sitting under the kitchen table in their home. The family would travel to Prince Edward Island where they would spend each summer on the family farm.

Service to God and church were important to Cathie, she was baptized at Park Street Church on Boston Common, and was a member of Sudbury United Methodist Church, where she taught Sunday School.

Her brother Bud befriended classmate and next-door neighbor John Guiou, who became smitten with Cathie. They courted through high-school, often taking the trolley to hear the Big Bands at Norumbega Park.  In 1946, Cathie went off to Framingham State Teachers College, John went off to serve in the US Navy, returning to marry his childhood sweetheart in 1952. They recently celebrated 69 years of marriage. Dad often said mom was his one and only love.

They began their married life occupying a small upstairs apartment in Newtonville, Massachusetts, where Cathie began her long teaching career.

The young couple moved to a home in the suburbs of Marlborough, Massachusetts. As children in during a hot summer in 1961, her sons recall setting-up a lemonade stand catering to construction workers building new homes. Cathie made them set the price at 0¢ per glass.

Cathie was a devoted elementary school educator upon graduating college in 1950, and taught continuously through 1990. In later years, she kept in touch with all her former 4th grade students, sending each a personalized letter on their graduation from high school.