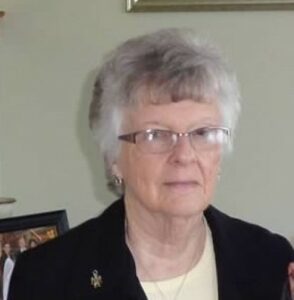 Hudson – Claire F. (Hacunda) Feehan, 80, of Hudson, MA, passed away peacefully, on Friday, January 21, 2022, at Artisan at Hudson, with her loving family by her side, after a period of declining health. She is reunited in heaven with her beloved husband of 39 years, Stephen E. Feehan, who predeceased her in 2003.

Claire was born in Boston, MA, on February 18, 1941, one of six children of the late Joseph F. and Sadie M. (Daly) Hacunda. She was raised in Arlington where she graduated from BC High school and went on to earn her associates degree in child psychology from Boston College. Claire married the love of her life Stephen E. Feehan on June 7, 1964 and later they settled in Hudson, MA in 1967. Claire worked for many years at Hudson National / Citizens Bank, where she eventually retired as the Bank Manager.

Throughout her life Claire was a devout catholic and a longtime member of Saint Michael’s Parish in Hudson; where she attended mass regularly and was a member of the Catholic Daughters. She also enjoyed spending time at the Hudson Senior Center.

There will be no calling hours. A Mass of Christian Burial will be celebrated at 10 am on Thursday, January 27, 2022 at Saint Michael Parish, 21 Manning St., Hudson, MA; followed by a procession to Forest Vale Cemetery on Broad St. in Hudson, MA, where Claire will be interred beside her beloved husband, Stephen E. Feehan.

Claire’s family requests flowers be omitted and donations instead be made to Shriners Children’s New England, https://www.shrinerschildrens.org/en/locations/new-england/about-us/ways-to-give.