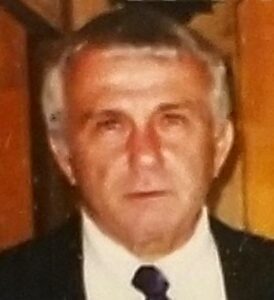 Southborough – Vincent P. Acampora, 81, of Southborough passed away on Wednesday, January 19, 2022 at Oak Knoll Healthcare Center in Framingham. He was the beloved husband of Suzanne (Scott) Acampora for over 62 years.

Vincent earned his bachelors degree from the University of Hartford and worked for several companies in Connecticut before working for C and K Componats where he was an electrical design engineer, retiring after 33 years of service.  He was an active member of the Southborough Senior Center, where he was a member of the Dull Men’s Club.

In his hometown of Bristol, CT, Vinny was very active in youth sports.  He was a long time coach with Bristol Midget Football as well as a coach and officer at McCabe Water Little League. He was also a business owner in Bristol, running the Omelettery and Kelsea’s.

Vinny will also be remembered for leading the Mum Festival Parade in his purple dune buggy.   He always loved having the whole family around, be it at family barbecues, family softball tournaments or beach parties.

Vinny was the biggest kid you would ever know. From building snow slides (legendary) to throwing his nephews into the ocean, all the kids wanted to be with Uncle Vinny.   He also stayed one step ahead. Whether it was cheating at board games or freezing eggs for egg smashing contests, you were not beating Vinny.

An avid New York Yankees and Giant fan, he loved giving it (and getting it back) from his Massachusetts group. His daily breakfasts with the Mauro’s crowd were a source of great enjoyment. He loved his yearly trips to Maine with his wife. Vinny was great with his hands, be it working on his cars or a woodworking project.  If he needed something fixed, you gave Vinny a call. He would give you the shirt off his back.

Vinny will be remembered as a son, a brother, a husband, a mentor, a role model, an uncle, a friend, a father, a “Poppy”. He will be missed by all that knew him.

He is predeceased by his daughter, Kyrie Bradford; his brother,  Anthony Acampora and a grandson, Quinn Bombard.

Visiting hours will be held on Tuesday, January 25, from 9 to 10:30 am at the Morris Funeral Home, 40 Main Street, Southborough.

A funeral Mass will be held on Tuesday, January 25 at 11 am at St. Matthew Church, 26 Highland Street, Southborough. Burial will follow in the Southborough Rural Cemetery.

In lieu of flowers memorial contributions may be sent in his memory to the Friends of the Southborough Senior Citizens, 9 Cordaville Road, Southborough, MA  01772.