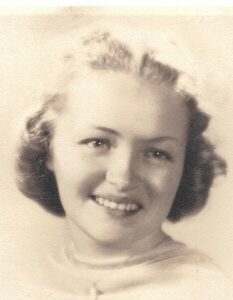 Marlborough – Anne M. (Carey) Lavallee, of Marlborough, MA, died on January 19, 2022, at St. Patrick’s Manor in Framingham. Born in Marlborough on July 13, 1921, she was the daughter of the late Edward J. and Lillian I. (Landry) Carey and the wife of the late Raymond D. Lavallee, who passed away in 2004.

She is survived by her daughters, Deborah Garcia of New Hampshire and Darlene Bourgeois and her husband Charles and her son, Jay Lavallee from Marlborough. She is also survived by her 7 grandchildren, Amber Swenson, Jeffrey Garcia, Timothy Bourgeois, Theodore Bourgeois, Alicia Garcia, Tara Bartley and Jayson Lavallee, as well as being blessed with 7 great-grandchildren, Tyler, Ian and Evan Swenson, Bailey Bourgeois and Kate, Jack and Charlie Bourgeois.

Anne was happy to take care of her home and spend as much time as she could with her 14 DARLINGS that affectionately called her “MAMIE.” Last, but certainly not least, her weekend “YARD SALES” were always a fun and enjoyable time.

Known as the “ QUEEN “ by many, HER MAJESTY celebrated a milestone 100 year Birthday this past July.  The entire family gathered on that day which represented 4 generations.

A very special “Thank-You“ to her loving caregiver, “Gigi“ who was her “Guardian Angel “.

Funeral arrangements for Anne are incomplete at this time.

Donations in her memory may be made to the following:  American Cancer Society, American Diabetes Foundation, St. Jude Children’s Research Hospital and Shriners.

The Slattery Funeral Home of Marlborough is assisting.