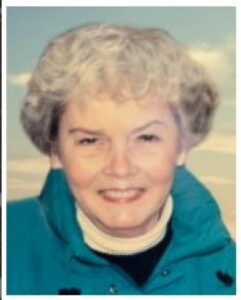 Shrewsbury – Elizabeth A. (Renard) Bowe, 93, of Shrewsbury, formerly of Madison and Wilton, CT passed away peacefully on January 11, 2022 at the Shrewsbury Nursing and Rehabilitation Center.

Liz was born in Lincoln, NE, daughter of Gustav and Mildred (Lundgren) Renard on June 11, 1928. The family, including her sister, Mary (Mimi) moved from Nebraska to California in 1937.

She graduated from Stockton High School. She earned her BS from University of California-Berkeley. In 1954, she married James F. Bowe, and moved to Portland, OR, Arcadia, CA and Wilton, CT where they raised their family. Upon retirement, Liz and Jim moved to Madison, CT. Liz later moved to Shrewsbury, MA to be closer to family.

Liz was a voracious reader and lifelong learner, taking classes wherever possible to keep her mind active. She loved gardening, was an accomplished seamstress and a talented cook. She enjoyed puzzles and sudoku, but her greatest joy came from interacting with her three children and eight grandchildren.

Liz was predeceased by her husband, Jim, who passed away in 2006. She leaves behind son James Bowe and wife Michele of Bethesda MD, daughter Ann (Bowe) McDermott and her husband Edward of Marion, MA (formerly of Shrewsbury, MA), and son David Bowe and wife Catherine, of Dallas, TX, along with eight grandchildren- James, Luke, Maria, Camile, Cecilia Bowe; Brian and Lauren McDermott; and Emily Bowe.

In keeping with Liz’s final wishes there will not be a service or calling hours. A Celebration of Life and burial will be held at a later date in Madison, CT.

The Chiampa Funeral Home of Shrewsbury assisted with arrangements.